We have a plum tree in our backyard, but only recently realized that the plums are actually edible! (We had thought they were ornamental because they're very small, but actually they're quite tasty!) I decided to turn some into an easy ice cream. I roasted the plums with muscovado sugar and then blended them with half-and-half and more sugar for a not-too-sweet, creamy dessert. You could add more white sugar if you want a sweeter ice cream, but I thought the balance with the strong flavor of the muscovado was perfect here. Plus, look at that color! So, so pretty.

The ice cream was good on its own, but what I was really after here was an accompianment to sweet desserts, another reason I wanted to keep the ice cream itself from being overly sweet. The roasted plum ice cream was terrific with brownies, as well as the stone fruit crisp pictured below (recipe coming soon). It was also tasty with one scoop of this paired with a scoop of sugar-y dulce de leche ice cream. Yum! 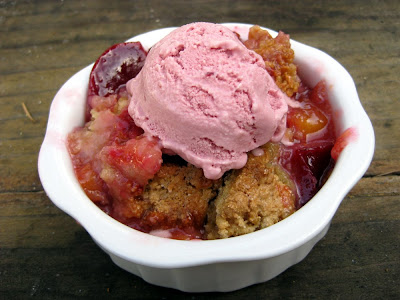 7 ounces plums (about 10 teeny plums)
1 1/2 ounces muscovado sugar, plus more for sprinkling
2 cups half-and-half
1. Preheat the oven to 400 degrees. Cut the plums in half and remove the pits. Place them all face-up in a baking dish and sprinkle with sugar. Roast until the plums are soft and have released their juices.
2. Allow the plums to cool slightly, and then place the roasted plums, along with any juice in the pan, in a blender and puree. Add the sugar and half-and-half and blend until very smooth. Taste and adjust for sweetness.
3. Pour the plum mixture into a small bowl and chill in the refrigerator until cold. Freeze in an ice cream maker according to your ice cream maker's instructions.
Posted by Sara at 2:50 PM