Wow, this has been a crazy week! One of my fellow grad students and I finally submitted a paper that we've been working on for about two years now, so that was very exciting. It had been under revise and resubmit at a good journal, so we're hoping that they like our revisions! Of course, this has meant a little less time for blogging, but now I'm back to it with the recipe for my birthday cake from a couple of weeks ago. 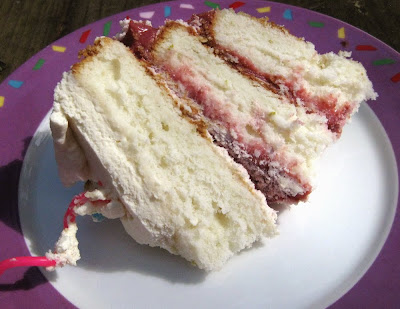 This has got to be one of my favorite birthday cakes that I've made. The cake part is based on Dorie Greenspan's Perfect Party Cake. Instead of a lemon or orange flavor as I've done in the past, this year I decided to try lime. I made a 1-1/2 recipe of the cake substituting lime zest for the lemon zest and baking three layers. Instead of the jam-and-buttercream filling in the original recipe, I adapted Sherry Yard's recipe for blackberry-lime curd. Since I was going for raspberry and lime as my flavors, I just substituted the blackberry puree in Yard's recipe with raspberry puree. Two 10-oz. bags of individually-quick frozen, unsweetened raspberries did the job well. In place of the buttercream, I used a lightly sweetened whipped cream. I may not have whipped it quite enough though, since the cake layers slid around a bit! Nonetheless, the cake was super delicious. It had three layers, with the raspberry-lime curd and whipped cream between each layer. One of the things I like about this particular cake recipe is that it's so easy to switch up the flavors and create a totally different cake. I'd have to say that this particular variation has got to be one of my favorites! 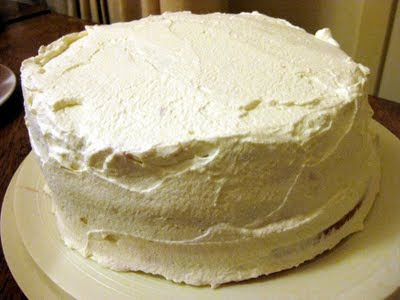 The leaning tower of cake! 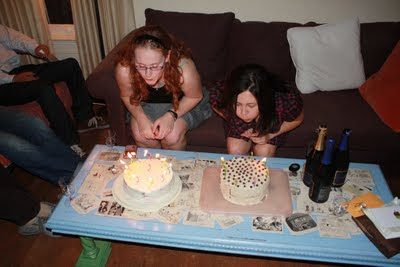 The birthday girls blowing out their candles!
Posted by Sara at 2:48 PM