I love butternut squash soup, especially when it's fancied up with other fun additions.  This one has fresh corn and roasted cauliflower, both of which pair well with the sweet squash.  I like the combination of textures here - the smooth butternut squash base, plus the chewy cauliflower florets and the little bursts of flavor from the corn.  The soup also has a bit of smoked Spanish paprika, which is pretty much my new favorite spice.  It adds fantastic flavor to almost any savory dish.

I actually picked this recipe because I wanted to try out my new immersion blender - which I'm loving!  So much easier for pureeing soup than transferring hot liquid into the blender and managing to spray myself with it half the time.  Plus, it's easy to clean, which is always an improvement in my book.  However, you can easily make this soup in the blender as well; just be sure to let the soup cool a bit first. 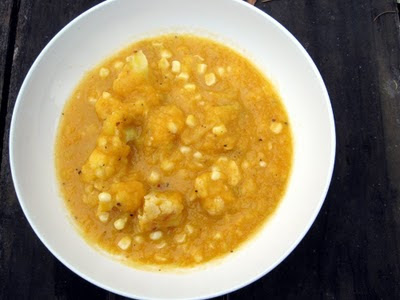 1. Preheat oven to 400 degrees.  Toss the cauliflower with oil, salt, and pepper, and roast until tender.
2. Meanwhile, heat some oil in a Dutch oven or large saucepan.  Add the leeks and cook for about five minutes until they start to become tender.  Add the garlic and saute for another minute or so.  Season with salt and pepper, and add the butternut squash and chicken broth.  Bring to a boil, and then simmer until the squash is tender.  Puree either with an immersion blender or a regular blender (if using the latter, be very careful!).
3. Add the paprika, corn, roasted cauliflower, and coconut milk, and return the soup to a boil.  As soon as it is hot, taste and adjust for seasoning, and then serve.
Posted by Sara at 10:47 AM