This is a quick and easy pasta dish that works well for a weeknight dinner.  The original recipe uses store-bought peperonata, which would definitely make this dish possible to fix up in the time it takes pasta to cook.  But, we found the peperonata was easy to make ourselves (and cheaper), and we were able to add in some summer squash for extra color and flavor. 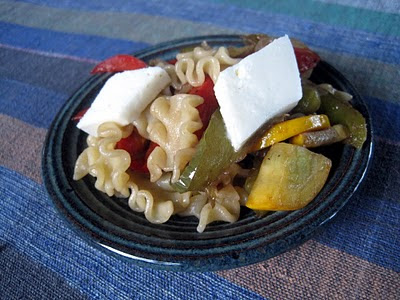 Pasta with Peperonata, Summer Squash, and Fresh Mozzarella (adapted from The Wright Recipes and Epicurious)

1. Heat oil in heavy large skillet over medium-low heat. Add onions, bell peppers and rosemary and sauté until onions and bell pepper are very tender, stirring occasionally. About 10 minutes before the bell peppers are done, add the summer squash to the pan and stir to combine.  Total cooking time should be about 40 minutes.  Off the heat, mix in the vinegar. Season to taste with salt and pepper.
2. Meanwhile,cook the pasta in boiling salted water until al dente.  Drain, and add the cooked veggies.  Toss to combine, and add a bit of olive oil or pasta water if needed.  Serve topped with the mozzarella cheese, salt, and pepper.


I'm sending this recipe off to Kitchen Bootcamp: Vegetables.
Posted by Sara at 5:35 AM