Ever since I got Dorie Greenspan's Around My French Table

a few months ago, I knew this was the sort of cookbook that was full of treasures I wanted to try my hand at. French Fridays with Dorie provides that little "push" needed to actually make that happen, by baking one recipe together each week. Now, you may notice that it's not Friday right now, but I do have a good excuse! I bought all the ingredients last Tuesday to be ready to go, but then I got a terrible head cold -- I blame the airplane! However, last night the dish of the week -  Gnocchi a la Parisienne - proved to be just as delicious on a Sunday as on a Friday. 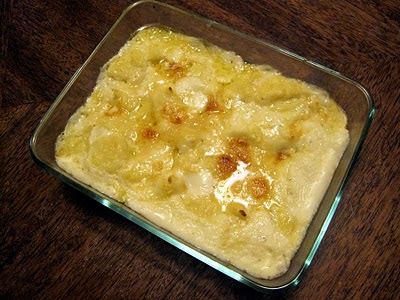 Gnocchi a la Parisienne is fantastic comfort food.  The gnocchi is made out of cream puff dough rather than potatoes, and so while it's sort of messy to deal with, I'd say it's actually easier to make than normal potato gnocchi - rather than forming each one individually and scoring with a fork, you just scoop teaspoons of dough into simmering water.  It also helped to have help when making this recipe, since there are a lot of components - thanks, Tim!

The sauce is a bechamel, which is where we ran into trouble.  For some reason, our sauce got way too thick (think Jello-bechamel).  Maybe this is because we were making a half recipe, so the proportions were off?  I wasn't sure I could save it, but it all worked out in the end.  If you ever have bechamel problems, here's what I did: I whisked the extra-thick bechamel over low heat with quite a bit of milk until it was starting to combine.  Then, I strained it, pushing all the lumps through the strainer to break them up, and then whisked everything over medium-low heat again.  Finally, I used my immersion blender to get rid of any remaining lumps and smooth everything out.  Voila - near-perfect bechamel! 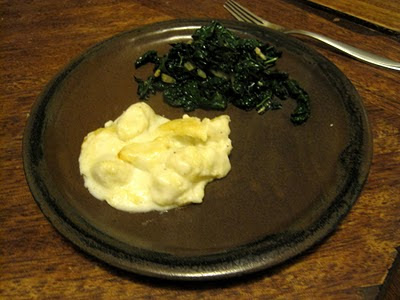 To add to the richness of poached cream puff dough and bechamel sauce, this dish is topped off with lots of cheese (I used Parmesan and Comte), as well as little dots of butter.  Then it goes in the oven to get all browned and bubbly.  Delicious!  Although Dorie says this can be served on it's own, I'd recommend serving it with something acidic on the side to cut through some of the richness. I sauteed some fennel, garlic, and thinly shredded dinosaur kale, and then squeezed lemon juice all over the veggies - this made the perfect side dish to balance out the gnocchi.

Note: since we're cooking through lots of recipes in Around My French Table

, we won't be posting all the recipes,  but I definitely encourage you to buy the book or check it out of your local library.  All the recipes I've tried so far have been fantastic, and it's so much fun to get a little taste of France at home!
Posted by Sara at 8:44 AM