This chickpea dish is very hearty and delicious, making it a perfect vegetarian dinner.  I cooked the chickpeas myself from dried chickpeas because I'd read that they're really different than canned chickpeas.  I was really happy with the results - I thought the chickpeas turned out with a better, nuttier flavor and a less mushy texture.  However, to make this a quick weeknight dish I think you could easily substitute canned chickpeas and still get a really good result.  Overall, the flavors of this dish were really interesting and not like other chickpea-spinach dishes I've had before.  The lemon is crucial - I thought the flavors felt a bit flat until I added it.  The smoked paprika is also a fantastic addition both in terms of color and flavor.

I only had about half as much spinach as the original recipe called for and I definitely thought it could use more - I listed the full amount in the recipe below and I'd recommend using it all unless you're also low on spinach!  It's amazing how much spinach wilts down - it seemed like I had plenty until I steamed it!  For the bread, feel free to make substitutions - the original recipe called for a "country loaf", and I used homemade whole wheat bread.  I think any relatively hearty bread would work well here (you wouldn't want soft sandwich bread). 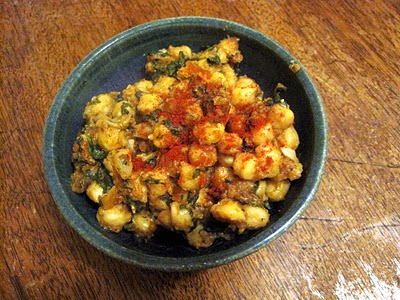 1. Steam the spinach until wilted.  Chop coarsely and set aside.
2. Heat the oil in a large non-stick saucepan over high heat.  Add the bread and and cook, stirring occasionally, until browned, about 5 minutes.  Turn off the heat and add the garlic, cumin, and red pepper flakes immediately.  Stir for one minute, either off the heat or over low heat as needed to slightly cook the garlic.
3. Scrape the mixture into a food processor and add the vinegar.  Process until the mixture forms a paste, and then return to the pot.  Add the chickpeas and tomatoes, and season with salt and pepper.  Cook over medium-high heat, stirring often, and add more crushed tomatoes as needed to moisten the mixture.
4. After about 5 minutes, add the spinach and lemon juice and stir to combine.  Once everything is warmed through, serve, sprinkled with smoked paprika.
Posted by Sara at 11:14 PM