Fine Cooking has a great feature most months called "Cooking Without Recipes."  Each features a different food like ice cream, potato salad, or fruit cobbler, and offers up a base recipe plus lots and lots of variations.  You can go crazy and create your own combination, or use one of the suggested ingredient combos.  Tim and I were inspired by the recent article on meatloaf, and thought the fennel-turkey meatloaf suggestion sounded terrific - and it was!

This is definitely one of the best meatloafs I've ever had.  The combination of fresh fennel and fennel seeds adds a complex and delicious - but not overpowering - fennel flavor to the meatloaf, and the method of soaking and then chopping bread cubes holds everything together really well.  The idea of wrapping the meatloaf in bacon is genius - it keeps the meat moist despite using ground turkey, and adds fantastic flavor.  This does make a large meatloaf, but the leftovers are just as good heated up in the microwave for a minute or so.  You could also easily make a half recipe (mini-meatloaf!) since the loaf is formed by hand rather than being baked in a loaf pan. 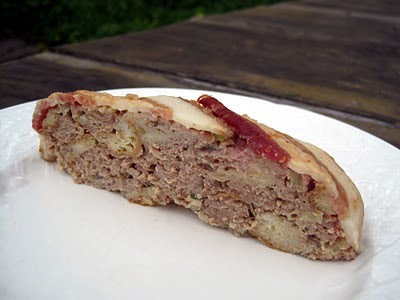 1. Heat 1-2 T oil in a nonstick skillet over medium-low heat.  Add the onion, fennel, and garlic, and saute, stirring frequently, until softened and just beginning to brown, about 8 minutes.
2. Add the white wine, and simmer briskly, until almost dry, 4 to 5 minutes. Transfer to a large bowl and let cool while preparing the remaining ingredients.
3. In a shallow dish that holds it in a single layer, soak the bread in the milk, flipping once, until soggy but not falling apart, 5-10 minutes. Lightly squeeze a handful of bread at a time to remove some of the milk (it should be wet but not drenched). Finely chop and add to the bowl with the onion mixture.4. Position a rack in the center of the oven and heat the oven to 375 degrees F.
5. Add the turkey and eggs to the onion mixture. Scatter the scallions, red pepper flakes, and fennel seeds over the meat, and then sprinkle with the Worcestershire, 2 tsp salt, and 1/2 tsp pepper. Use your hands to gently mix all the ingredients until just combined, being careful not to compact the mixture too much.
6. Set a non-stick pan over medium low heat, and form 1 T of the meatloaf mixture into a small patty (or use a bit of oil in a regular pan).  Cook the patty on both sides until cooked through, about 5 minutes total.  Taste and adjust for salt, pepper, and any other seasonings.
7. Line a 9x13-inch baking pan with parchment paper. Transfer the meatloaf mixture to the baking pan and form into a 10x4-inch rectangular block (it becomes loaf-shaped as it cooks). Finish the meatloaf by draping it with strips of bacon on the diagonal.  Trim the bacon with kitchen scissors to fit, and use extra trimmings to cover the ends.
8. Bake until an instant-read thermometer registers 165 degrees F in the center of the meatloaf, 40 to 55 minutes.  Then broil the meatloaf about 6 inches from the broiler (or turn the oven up to 500 degrees and return the meatloaf to the oven on the top shelf), until the bacon is brown and crisped, about 3 minutes.
Let rest for 10 minutes. Carefully transfer to a cutting board or serving platter with two large spatulas and cut into 3/4 - to 1-inch-thick slices.  (It helps to have two people for this - one to transfer the meatloaf, and the other to hold the pan steady.) 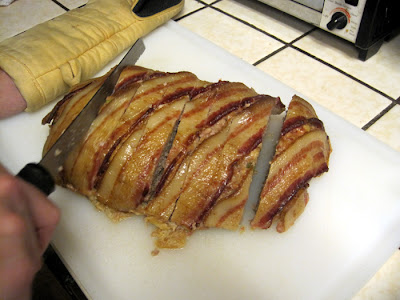