Tim and I made an awesome brunch on Sunday morning...I love lazy weekend mornings, especially when they include large amounts of carbs!  :)  Well, this one definitely fit that bill.  Tim made his home fries, which are seriously the best home fries I've ever had - the trick is par-boiling them a bit first so they get perfectly crispy on the outside but are still cooked through.  I contributed French toast with orange-mint-blueberry compote.  The French toast recipe I used was from Cook's Illustrated's The New Best Recipe

.  As with so many of their recipes, it had three times as many ingredients/steps as my usual French toast, but really didn't taste any different from my go-to recipe of eggs, milk, and vanilla (about 4 eggs to 1 cup milk and 1 tsp vanilla).  So, I'd say save yourself some trouble and make your favorite simple French toast, and then spend the extra time making this delicious blueberry compote and frying up some bacon so you have bacon fat to cook your French toast in!  (Yum.)

The compote is actually super easy, and lends itself to lots of variations - you could really use any citrus and herb here with the berries - lemon peel and lemon thyme, for example, would be fantastic.  I like to combine cooked-down berries with whole berries stirred into at the very end so that you get a nice mix of textures.  Other berries, like strawberries or raspberries, would also be great, so just go with what looks good at the supermarket. 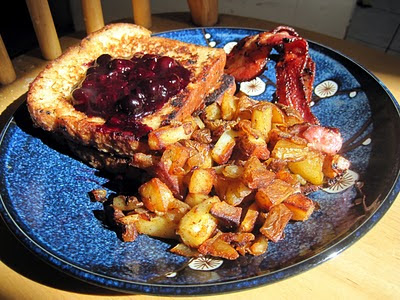 1. Place about half the berries along with the orange peel, mint, and sugar in a saucepan.  Add about 1/3 cup water (just enough to cover the berries about halfway).  Place the pot over medium heat and bring to a boil, stirring often.
2. Reduce heat to a simmer, stirring occasionally, and simmer until the berries have popped and become saucy.  Continue to simmer until the sauce is somewhat reduced (to whatever thickness you like - time will depend on the amount of water used in step 1).
3. Remove from the heat and remove the orange peels and mint.  Taste, and add more sugar if desired.  Stir in most of the remaining berries, and return pot to the heat until the sauce is just heated through.
4. Serve over french toast (or pancakes, or ice cream!), along with the reserved berries.
Posted by Sara at 7:00 AM