This week's French Fridays with Dorie recipe was the Basque Potato Tortilla.  I was whipping up a quick lunch today and didn't have time to run to the store, which is why you won't see the word "potato" up there in the title of this post!  Instead, I decided to use up some other veggies in the fridge that really needed to be cooked before they went bad. 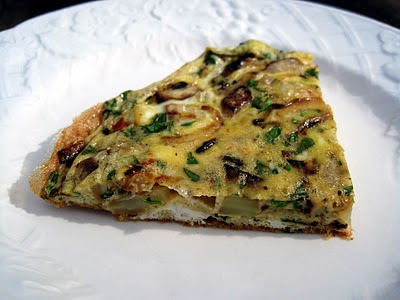 I sauteed some thinly sliced onion, garlic, and diced fennel in oil until soft and pretty darn browned (I like my onions really dark!), and then combined that with some eggs, smoked paprika, and cilantro.  (Side note: why do they sell cilantro in such large quantities?  I'm never able to use it all up!)  This all got poured back into the pan, cooked on the stovetop for a few minutes, and then popped in a 350 degree oven until the egg was cooked through.   I wasn't sure about the combination of fennel and cilantro - it was more a marriage of convenience than of "wow, these would sure taste amazing together!", but actually it worked well.  The flavors didn't clash, and the cilantro added a nice pop of green to an otherwise monochromatic dish.
Overall, I was pretty happy with this as a quick lunch, but it didn't blow me away.  I'll have to try it with the real deal of potatoes sometime and see if that changes things!
Posted by Sara at 1:08 PM