My dad came up with this recipe out of some ingredients in the fridge, but I thought it was too good not to share!  After I tasted his sandwich, I had to make one of my own!  Although you might hesitate to pile lots of pickles on the sandwich, don't worry - these pickles are aren't super sour and won't overwhelm the other ingredients.  Depending on how many sandwiches you make, you'll probably have some pickles left over - don't worry, they keep in the fridge for quite a long time and they're great to snack on or add to lots of types of sandwiches.  The toasted bread is crucial here to provide some needed crunch.  Definitely eat this with lots of napkins, because the pickles make it more than a little messy to eat - but it's so worth it!  If you don't have Jarlsburg cheese, try something else - I also made a very tasty version with Ewephoria (my absolute favorite sheep cheese). 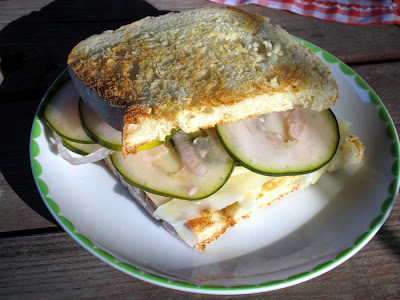 Toast the bread, spread on the mustard, add a few thin slices of cheese, and then pile on the pickles!

Combine all of the ingredients and stir well.  Refrigerate for at least one day, stirring occasionally.  Although the liquid won't completely cover the cukes and onions at first, they'll eventually soften and take up less space.  Pickles will keep in the fridge for a couple of weeks, and are fantastic on sandwiches, salads, with pita and hummus, or just to munch on.


I'm sending this sandwich off to These Chicks Cooked!
Posted by Sara at 8:26 PM