I was instantly hooked when I saw this recipe - roasted peppers, quinoa, and Moroccan flavors definitely all float my boat.  My mom and I decided it would be the perfect dish to make and take down to my grandma's for dinner, and it definitely was - she loved it!   We roasted green peppers instead of red peppers just because the red peppers were so expensive at the store - they were four times as much as their green counterparts!  Although it made for a slightly-less-pretty salad, I think the taste was just as good.  You could also save some time and buy jarred red peppers, although you might want to increase the amount - I always find that the yield is a bit more when I roast peppers myself.

The Moroccan salsa is perfectly balanced with warm spices, acid from the lemon juice, brine-y olives, and sweet raisins.  If you don't like the taste of olives, you could reduce the amount by half, although I didn't find the flavor overpowering at all.  The salsa pairs perfectly with slightly chewy quinoa, which also adds a boost of protein (especially important if you're serving this vegan-style, sans cheese, as the recipe was originally written).  However, I think barley or whole wheat Israeli couscous would also be great in this dish if that's what you have on hand.  Overall, this was a very tasty, light dinner with lots of great flavor!  I think this would also make a great lunch since it's good at room temperature - I'd pack the salsa and quinoa separately and combine them at lunchtime. 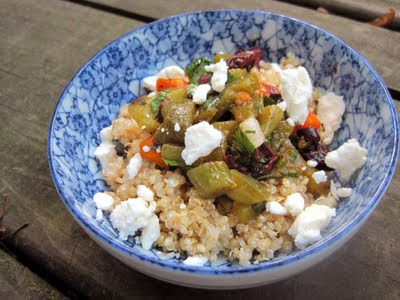 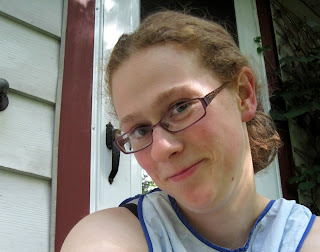 Cooling off on the back steps after an afternoon of cooking and baking...
Posted by Sara at 5:12 AM