Wow, this is one decadent pizza, but it is so good!  Notice the "panna" in the title - sounds sort of innocent, maybe like it's a kind of cheese?  At least that's what I thought when I read the recipe title.  Actually though, it's unsweetened whipped cream, which is used on this pizza instead of a sauce!  Sounds crazy, but it makes for a super rich and delicious base for the other toppings (and actually you're not using an insane amount, just 1/4 cup per pizza).  The cream base is topped with sauteed fennel sausage, thinly shaved fennel, scallions, and fresh mozzarella - use a light hand with toppings as this is a thin crust pizza and you don't want to weigh it down.  Plus, everything is so rich that you don't want the pizza to be overwhelming!

All these amazing toppings are scattered on top of a no-knead pizza crust with cornmeal and olive oil.  I honestly couldn't really taste the cornmeal, but it did make for a really lovely yellow color.  This dough was easy to put together, and you can keep it in the fridge for a few days before using.  It was somewhat more difficult to stretch into thin crust pizza than some other crusts I have tried, probably because the combination of all-purpose flour and cornmeal isn't super high in gluten (it was also a fairly moist dough). However, once I got it stretched it crisped up really nicely and was a great base for the toppings.  This crust is definitely best the night it's cooked as it becomes somewhat soggy hanging out in the fridge overnight - although you can reheat it in a 500 degree oven and get fairly good results.  You can freeze the extra unbaked dough if you like -- as with other dough I've frozen, it's a little less elastic once it comes out of the freezer (and so harder to stretch), but still perfectly delicious! 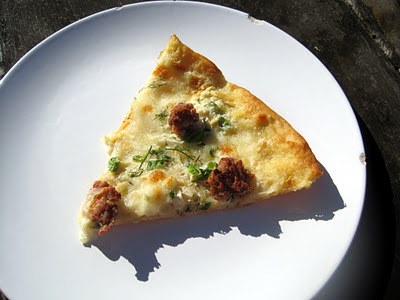 Sausage, Panna, and Scallion Pizza with Cornmeal Olive Oil Crust (adapted from Artisan Pizza and Flatbread in Five Minutes a Day and the The Mozza Cookbook

)
Serves 2-3
Makes enough crust for four thin crust pizzas and toppings for two pizzas (double the toppings if you want to make four pizzas, or save two portions of dough for later)


1. Combine all the dough ingredients in the bowl of a stand mixer and mix until combined (or stir together in a large bowl).  There is no need to knead.
2. Cover and let rise at room temperature for 2 hours, or until the dough has risen and then collapsed.
3. Stick the dough in the fridge for up to ten days in a covered but not airtight container.
4.  Prepare the toppings: saute the sausage in a non-stick pan until browned and cooked through, and get everything sliced and ready.
5. When ready to cook the pizza, preheat the oven to as hot as it will go.  Shape the dough into four half-pound (8-ounce) balls.  You can pop some of the dough back in the fridge or freeze some (in an airtight container, for up to 3 weeks) at this point if you like, or shape as many as you like into pizzas.  The amounts listed for toppings above are for two pizzas.  For each pizza you want to cook immediately, stretch into a 12-inch round and place on a pizza pan (or you can use a pizza peel/pizza stone if you're fancy like that!).
6. Brush 1 T olive oil on the rim of the crust and sprinkle the entire thing with salt.  Spoon half the cream in the center, and spread evenly, leaving a rim around the edges.  Scatter with half the shaved fennel.  Scatter half the sausage over the pizza, and top with half the mozzarella.  Scatter on half the scallions.
7. Place the pizza in the oven and bake until the crust is nicely browned on the bottom.  Remove from the oven and sprinkle with the fennel fronds. 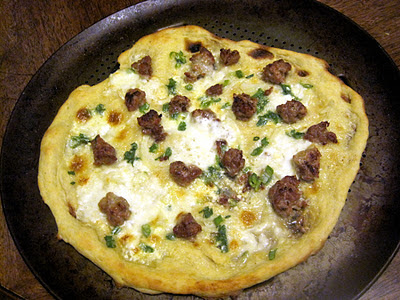 I'm sending this post off to These Chicks Cooked!