You know how you're not supposed to make a recipe you've never made before when cooking for a dinner party?  Well, I never follow that rule because I love making new recipes!  And it generally works out just fine, as with this very tasty pasta dish - really, you can almost never go wrong with Mark Bittman's recipes.  I made this pasta for a recent gathering of my book club (this past month's selection was Moneyball

).  I had to make a few substitutions because I was shopping at Trader Joe's - as you may know if you shop at this store, they stock lots of really cool and unique items, but the produce section is sometimes pretty lacking.  Since the store didn't have radicchio, I subbed in half the amount of endive and some butternut squash -- not totally sure why I picked the squash, it just seemed like it would go with the other ingredients!

Overall, we all really liked the pasta (served with a big salad on the side), but I would definitely try to find radicchio next time and use the full amount (four pounds) as I felt the dish was lacking a bitter element - the endive definitely got lost among the other flavors.  Radicchio's purple color would also make the dish a bit prettier, which is never a bad thing!  You could also probably add more balsamic vinegar than the recipe calls for as the flavor wasn't super strong.  Although I don't often like whole-wheat pasta, I thought it worked really well here with the other flavors and made the dish feel a bit more hearty.  I loved coming across pieces of steak throughout the pasta - skirt steak worked well here but you could use any inexpensive cut that cooks relatively quickly. 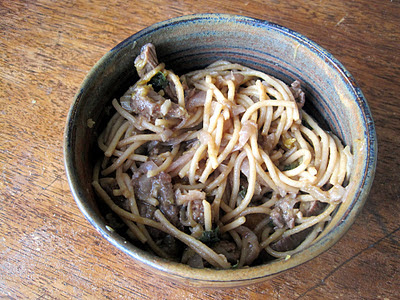 )
Serves 8
Salt
1/4 cup oil
1-1/2 to 1-3/4 pound skirt steak
Pepper
1 pound butternut squash, peeled and diced
2 pounds Belgian endive, cored and thinly sliced
2 red onions, halved and sliced
2 T minced garlic
1-1/2 pounds whole wheat spaghetti
1/4 cup balsamic vinegar
1 cup roughly chopped fresh basil
1. Bring a large pot of water to a boil and cook the pasta until just shy of al dente, reserving 1 cup pasta water.
2. Meanwhile, heat the oil over medium-high heat in a skillet.  Add the steak, sprinkle with salt and pepper, and cook 2-3 minutes per side until browned but rare.  Remove from skillet and cover with foil; let rest at least 5 minutes before slicing.
3. Add the butternut squash to the pan and cook for about 10 minutes, until softened.  Add the radicchio, onion, and garlic to the skillet and lower heat from medium.  Cook, stirring occasionally, until the vegetables soften, 5 minutes.  Lower heat and cover.
4. Thinly slice the steak, capturing all the drippings.
5. Add the vinegar to the skillet, stir, and let bubble until it thickens slightly but does not evaporate, just a few seconds.  Toss in the pasta, steak and juices, basil, and a generous grind of black pepper, as well as just enough pasta water to keep the mixture moist.  Taste and adjust seasoning, and then serve hot or room temperature.
Posted by Sara at 9:56 AM