Today is my birthday!  And although this isn't a birthday cake - it's one a made a week or so ago - I still thought it would be appropriate to celebrate with a cake post!  This cake is absolutely fantastic - moist and spicy with a sweet-tart layer of juicy plums on the bottom.  We got some sort of weird plums in our CSA - they never really got soft enough to eat raw, but the skin was clearly starting to get a little wrinkly and old-looking.  This recipe is the perfect use for imperfect fruit - after baking, the plums were so delicious and it was impossible to tell that they weren't in their prime.

If you have access to golden syrup, you can use it in place of the dark corn syrup, as that's what the recipe originally called for.  I know everywhere online says golden syrup is supposedly impossible to substitute for, but don't let a lack of access stop you from making this cake!  It works perfectly well with dark corn syrup, which should be easily available in American grocery stores.  Whatever you can get, definitely make this cake sometime before plums go out of season.  It's like autumn in cake form, and it lasts really well if you have leftovers. 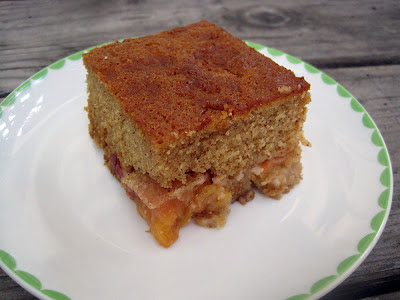 1. Preheat the oven to 350 degrees and line a 9x13 baking pan with parchment.  Spray the parchment with oil.
2. Sift together the flour, baking powder, cinnamon, and baking soda in a large mixing bowl.
3. Combine the dark corn syrup, honey, and butter in a small saucepan.  Heat over medium-low heat until the butter is melted.  Add the brown sugar and stir to combine over the heat for a minute or two.
4. Using a two cup liquid measuring cup, measure out the milk.  Add the eggs, and then whisk to combine.
5. Pour the golden syrup mixture into the flour and mix together until almost blended.  Add the egg-milk mixture and whisk until well combined.
6. Lay the plums in the cake pan, each with one cut side down.  Pour the batter over the plums.  Bake about 35 minutes, until a tester comes out clean.
Posted by Sara at 6:30 AM