I've had a craving for cinnamon-raisin bread recently, and just got around to making some.  I started with a tried-and-true whole wheat loaf to make the bread a little healthier.  After the first rise, I gently patted it into a rectangle - this dough is not to soft, so it's really easy to work with.  Then I topped the dough with raisins and a bunch of grinds from the Trader Joe's cinnamon-and-sugar grinder that I recently got (this thing is genius!).  Of course, you can just mix up some cinnamon and sugar yourself if you're not near a Trader Joe's.    The bread baked up soft and delicious, with great flavor.  And, it's not too sweet - you can enjoy this for breakfast with butter, but it also works as the base for a PB & J at lunchtime. 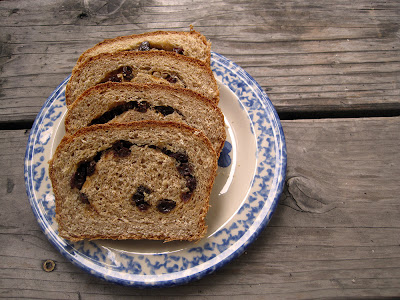 1. Prepare the dough for the bread up through the first rise.  While the bread is rising, pour boiling water over the raisins until they are covered by a few inches.  Let sit for half an hour or so, and then drain well.
2. Punch down the dough and press into a rectangle as long as your loaf pan.  You shouldn't need flour as the dough is not very sticky.  Sprinkle the raisins over the dough, leaving about a 1/2-inch border all the way around.  Sprinkle generously with the cinnamon and sugar - I just did several grinds of the cinnamon-sugar grinder until the raisins looked well-covered.
3. Roll up the dough into a log and press into an oiled loaf pan.  Proceed with the rest of the bread recipe, baking about 5 minutes longer.  Let cool before slicing.


I'm sending this recipe off to Kitchen Bootcamp: Yeast Breads!
Posted by Sara at 10:03 AM