Continuing my week of slow cooker recipes is this excellent vegan offering.  I'm a big fan of caponata, but I never thought to make it in the slow cooker!  It worked perfectly - everything got nicely tender and all the veggies stayed juicy in the crockpot.  If you've never had caponata before, it's a mixture of tomatoes, eggplant, and zucchini with various other flavors added to make an extra delicious vegetable dish. I've often seen it served on crostini as an appetizer, but it works great as a main dish as well - we served it over quinoa, but pasta or couscous would be a great accompaniment as well.  This dish does involve a lot of chopping since there are lots of veggies, but then it's just set it and forget it - so easy! 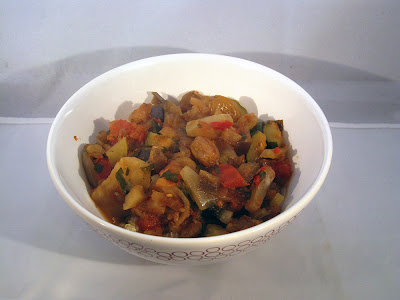 Combine everything in the crockpot and stir to combine.  Cook on low heat for 8 hours, stirring halfway through if you happen to be home (I think it would be fine not to do this if you aren't home!).  Taste and adjust seasoning.  Serve over quinoa, rice, or pasta.
Posted by Sara at 2:50 PM