There is only one word for these cupcakes: WOW. Mercedes of Desert Candy posted this amazing recipe for Coconut-Dulce de Leche cupcakes, and I immediately knew I would have to make them. The cupcakes are perfectly fluffy with a delicate coconut flavor that's especially good while they're still slightly warm (though the cupcakes are also really delicious later, once cooled). Then, the frosting just tops everything off perfectly with an amazing, sweet, caramel-y flavor that's tempered by tangy cream cheese. You must try these--wow! They will probably require a trip to the store--or at least they did for me--because they have some ingredients that don't typically show up in the pantry (coconut extract, dulce de leche, etc.) but it is so worth it. Yum!

I changed the recipe just a teeny bit from the original, using unsweetened coconut instead of sweetened...this was all that was available at the local Whole Foods, so I went with it. It seemed to work out fine and because the pieces were smaller, I could just dump them directly into my batter after toasting. If you're using sweetened coconut, you might want to follow the original recipe instead (linked below). 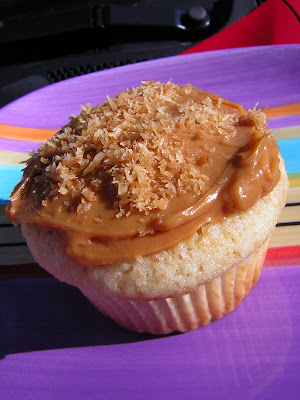 Frosting:
1/2 cup dulce de leche (I used store-bought but you can make your own also)
3 tablespoons cream cheese

1. Preheat oven to 350 F. Spread coconut on a baking sheet and toast until golden (watch carefully that it does not burn). Set aside to cool.

2. In a large bowl, beat butter and sugar for about 5 minutes, until light and fluffy. Stir together flour, baking powder and salt. Set aside. Combine egg whites, milk and vanilla and coconut extracts. Add 1/3 of the flour mixture to the butter mixture then add half the milk mixture. Continue to alternate beginning and ending with flour mixture, until mixture is well combined. Set aside 1/4 of the coconut for topping, and stir the rest into the batter.

4. Make the frosting: Stir together dulce de leche and cream cheese until smooth. Spread on cooled cupcakes. Sprinkle reserved coconut on top.
Posted by Sara at 11:26 AM