Coconut & Lime, one of my favorite blogs, is having an anniversary--four years! In honor of that, Rachel is holding a contest, which you can read all about here.

I chose to make Rachel's amazing Rhubarb Cupcakes with Fluffy Rhubarb Frosting. These were amazing. The cupcakes are nice and moist, very sweet with little chunks of sour rhubarb to brighten things up. The frosting is even better, fluffy and marshmallow-y with a subtle, sweet rhubarb flavor and a hint of pink color. I could eat this out of a bowl by itself! Together, this is an excellent treat with the rhubarb playing two roles--sour in the cake and sweet in the frosting. Yum!

1. Preheat oven to 350.
2. Cream together butter and sugar in a large bowl. Add egg and vanilla, and beat until completely combined.
3. In a small bowl, whisk together flour, baking powder, and salt. Add to the butter mixture along with the milk and beat until well combined. Fold in the rhubarb.
4. Divide batter among 12 muffin cups. Bake 12-15 minutes until a toothpick comes out clean. Make sure the cupcakes are baked all the way through as they are very moist. 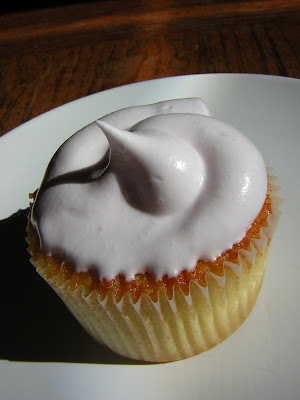 1. Beat the egg whites and salt to soft peaks using an electric mixer. Set aside.
2. In a medium saucepan, bring sugar, rhubarb and water to a boil, stirring occasionally. Continue to boil until it reaches soft ball stage (235 degrees on a candy thermometer), while continuing to stir occasionally. Strain and discard the rhubarb into a bowl or measuring cup with a spout, pressing on the rhubarb to extract as much syrup as possible.
3. Briefly beat the egg whites again for a couple of seconds. With the mixer running, slowly stream in the rhubarb syrup. Beat about 5 minutes until the frosting is glossy and voluminous. Add the vanilla and beat to combine.
4. Transfer to a pastry bag and pipe onto cooled cupcakes.

Note: Because this is a meringue-like frosting, it will look best the day it is made. It still tastes good after that, but won't look as glossy. 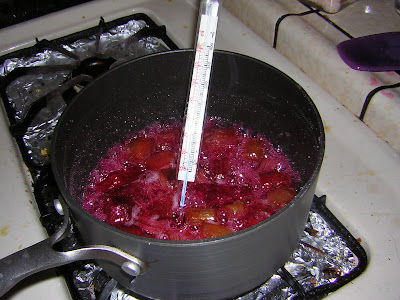 Here you can see the cooking rhubarb syrup. I was very excited to be able to use my grandmother's candy thermometer!
Posted by Sara at 9:07 AM