I recently won a blog giveaway on I Heart Cuppycakes! Wooo! I was so excited to receive my box of goodies a few days ago...you can see it all in this photo except the Beater Blade, which was on my mixer: 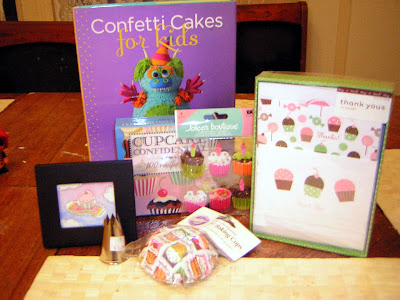 So many wonderful cupcake goodies! I put my winnings right to use with some espresso-peanut butter cupcakes. I loved the idea of espresso cupcakes, but the frosting was an American-style buttercream which I just wasn't in the mood for. Meanwhile, while I was glancing through my new copy of Confetti Cakes For Kids

, I saw a Swiss meringue buttercream with peanut butter that looked simply divine. And it was--perfectly light and fluffy with amazing peanut butter flavor. I also used my new Beater Blade to mix the cupcakes, and it worked perfectly with the somewhat thick batter, mixing it thoroughly and scraping the sides really well.

These were fabulous cupcakes. Although the combination of peanut butter and espresso sounds a little odd, it actually works really well. The somewhat thicker cupcake batter goes well with the light frosting, too. If you don't have self-rising flour, feel free to click through to the original recipe to get the amounts of leavening and salt; I just used it because I had some on hand and it worked well. I thought these cupcakes were best shortly after being frosted (within a few hours), but they'll keep for a few days in an airtight container. 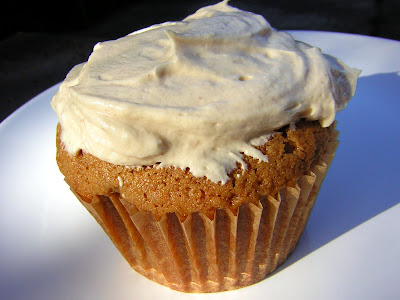 1. Preheat the oven to 350 degrees. Place cupcake liners in two cupcake tins (for a total of 24 cupcakes).
2. Measure out the flour in a small bowl. Mix together the sour cream and espresso powder in another small bowl, stirring vigorously until the espresso powder is dissolved.
3. Cream together the butter and sugar in a large bowl until light and fluffy. Add the eggs and vanilla and beat until well combined. Add the flour and sour cream in alternating batches (flour-sour cream-flour-sour cream-flour), mixing after each addition until just incorporated.
4. Divide the batter among the cupcake tins. Bake 20-25 minutes or until a tester comes out clean. Let cool completely before frosting the cupcakes.

1. Whisk together the sugar and egg whites in the top part of a double boiler. Whisk continuously over a pan of simmering water until the mixture is hot to the touch, making sure not to let the eggs cook.
2. Quickly scoop the sugar-egg white mixture into the bowl of a stand mixer fitted with the whisk attachment. Beat on high speed until the mixture has cooled and formed a stiff meringue.
3. Stop the mixture and switch to the paddle attachment. Add the butter on medium-low speed, one cube at a time. Wait for each piece of butter to be incorporated before adding the next one. Turn up the mixer and mix until fluffy. Add a splash of vanilla.
4. Add the peanut butter and mix it in on low speed. Scrape the bowl and then whip at medium speed until smooth, light, and fluffy. If the consistency is too liquid, you can refrigerate it and then re-whip.
Posted by Sara at 1:40 PM