This dessert may look like a challenge from the Daring Bakers, but actually it's one my mom and I decided to tackle all on our own! I would have to credit my past year as a member of the Daring Bakers in the success of this dessert, though, because without the techniques I learned through this group, I think the recipe would have been much too intimidating. I'm glad we did try it though, because believe me, this is so delicious. I would recommend making this with a friend because even with two of us, it has a lot of elements and was a lot of work. The final product was well worth it.

The January issue of Martha Stewart Living has a beautifully photographed feature on all types of meringues. The pineapple dacquoise really jumped out at me because I love fresh pineapple and I had just made a delicious dacquoise layer for our December Daring Bakers challenge. The dessert actually has two meringue layers, the dacquoise/almond meringue layer and a pineapple French meringue buttercream. These are layered with caramelized pineapple, pineapple syrup, and chopped almonds--wow! (The chopped almonds were a pineapple-almond praline in the original recipe, but we didn't have the energy to make yet another element by the time we got to this part, and we thought the dessert was plenty sweet enough in any case.)

The finished pineapple dacquoise should be chilled at least briefly before eating it. If you eat it the same day it is made, the meringue will be somewhat more crunchy; if you save it until the next day, the meringue will be somewhat softer but we thought even more delicious. It is also easier to slice if it has been chilled at least overnight, although slicing still takes some patience (I never got it quite perfect!). 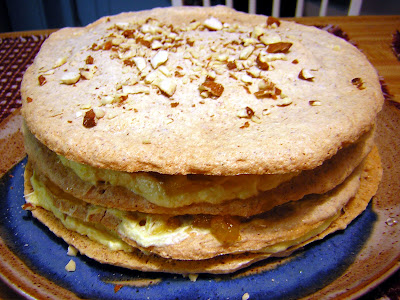 1. Make the meringue: Pulse flours and confectioners' sugar in a food processor until combined. Sift 3 times.

2. Preheat oven to 275 degrees. Line 2 rimmed baking sheets with parchment, and draw two 7-inch circles on each (for a total of 4 circles). Flip parchment over. Whisk whites, cream of tartar, and superfine sugar with a mixer on medium speed until combined. Gradually increase speed to high, and whisk until stiff peaks form, about 10 minutes. Add vanilla. Fold in flour mixture in 3 batches, adding each batch before previous batch is fully incorporated. Spoon batter into a pastry bag fitted with a 1/2-inch plain round tip. Starting in center of each circle, pipe a tight spiral to edges. Bake until dry and crisp but not browned, 45 to 50 minutes. Let cool on sheets.

3. Make the pineapple: Puree 1/2 cup fresh pineapple, and reserve for buttercream. Mix juice, granulated sugar, and salt in a large skillet over medium heat. Cook, whisking occasionally, until sugar dissolves. Add the remaining pineapple slices to skillet. Bring to a simmer, and cook until pineapple is light golden brown and liquid is syrupy, 1 hour or longer. (Add more pineapple juice if liquid evaporates too quickly.) Let cool in skillet.

5. Make the pineapple buttercream: Bring sugar, corn syrup, and water to a boil in a small saucepan, stirring until sugar dissolves. Wash sides of pan with a wet pastry brush to prevent sugar crystals from forming. Boil, undisturbed, until mixture registers 245 degrees on a candy thermometer.

7. Reduce speed to low, then add the pureed caramelized pineapple and the pureed fresh pineapple. (Buttercream will keep, covered and refrigerated, for up to 3 days. Bring to room temperature, then beat on low speed before using.) 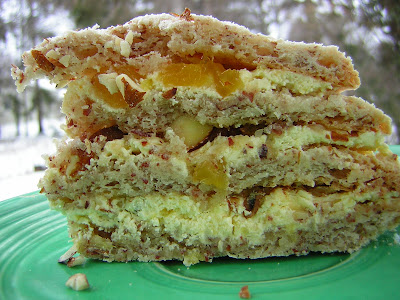 For other terrific recipes from magazines, check out Magazine Mondays.
Posted by Sara at 3:49 PM