Happy New Year! In light of the possible New Year's resolutions people may have made, I'm posting a salad today instead of baked goods. ;)

This is a really tasty salad from the latest issue of Martha Stewart Living that's perfect for an slightly fancy lunch. It has a lot of parts, but with a couple of people working on it, it comes together fairly quickly.

The original recipe called for sour oranges, which we didn't have; regular oranges still made a delicious salad. The original recipe also called for grilling the bread and shrimp, but since that's not exactly practical for the middle of winter, a big skillet works just fine. Even though this is from a January magazine, and even though all the ingredients are available in the winter, the recipe has a nice summery feel which can be really nice when it's cold outside!

My only reservation with this recipe is the salad dressing. While it's definitely delicious, it doesn't taste anything like a typical Caesar salad dressing. I'm not sure what exactly defines Caesar salad, but for me the dressing is a big part of it. I would recommend using your favorite store bought dressing here or another homemade version, perhaps with the addition of orange zest to bump up the orange flavor (this one, also from Martha, is very tasty). The orange-garlic dressing here would be delicious on mixed greens or pretty much any other salad that you're not calling a Caesar! 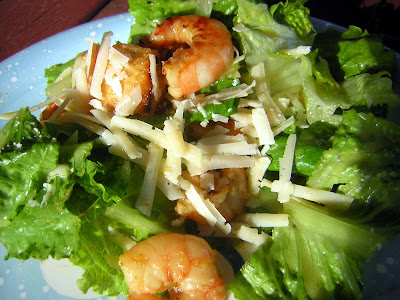 1. Mix shrimp and 2/3 cup marinade in a medium bowl. Cover and let stand, turning shrimp once, for 20 minutes.
2. Meanwhile, brush both sides of the baguette halves with Orange and Garlic Oil, and season with salt and pepper. Toast in a hot skillet until nicely browned. Let cool slightly and then cut into cubes.
3. Cook the shrimp over medium-high heat in a large skillet, working in batches as needed. Toss with remaining 1/3 cup marinade and let cool slightly.
4. Make the dressing: plunge whole egg in boiling water for 1 minute. Remove and let cool slightly in shell. Whisk together orange and garlic oil, orange juice, lemon juice, and Worcestershire in a large bowl. Whisk in egg. Season with salt and pepper. Taste, and adjust the seasoning as needed.
5. Toss dressing with romaine, avocado, croutons, and shrimp. Serve with Parmesan cheese.

Whisk everything together in a bowl. Can be covered and chilled up to one day.

Heat all ingredients in a small saucepan over low heat for 20 minutes. Let cool. Strain and discard solids, reserving 1 garlic clove for the Mojo Marinade. Can be covered and chilled up to one week. 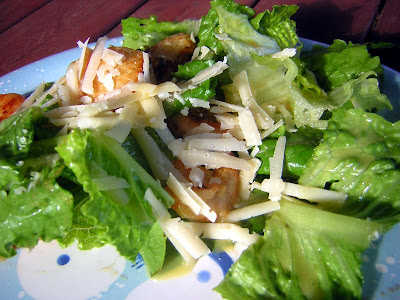 I'm sending this recipe off to Blogger Secret Ingredient: Parmesan!
Posted by Sara at 12:50 PM