I'm in a PhD program in political science, and American politics is my area of study. This past Friday, four of us so-called "Americanists" got together to host an America-themed happy hour for our department. I did a days-worth of baking (fun, but exhausting...I could never be a professional baker!), and we also had American cheeses (including one of my very favorite cheeses, Humboldt Fog), American wine, and American beer. Here's what I baked:

All of these had components that I'd made before because I didn't want to screw everything up for a big crowd! So, I've linked to the original recipes in the list above, and I'll post later in the week about the two new frosting recipes I came up with (both based on a Martha Stewart recipe). 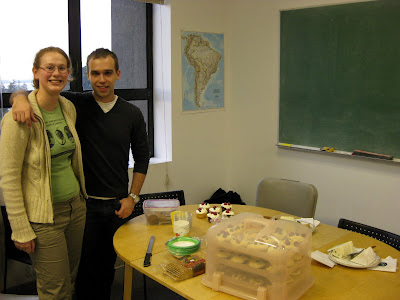 Fellow Americanist Peter and I pose with all the goodies; Devin was taking the photo and John was in search of a cutting board. 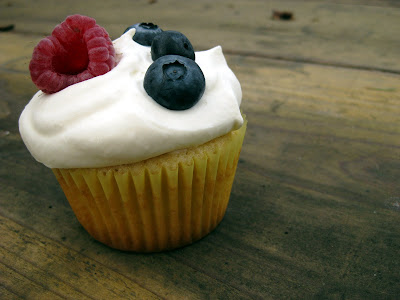 These Red, White, and Blue cupcakes were a crowd favorite, and they couldn't have been easier to make. First, I baked up a double recipe of Elinor Klivans' quick vanilla cupcakes (you can use 3 whole eggs in place of the egg and egg yolk when doubling the recipe). After they cooled, I whipped up two cups of heavy cream along with sifted powdered sugar to taste until the cream could hold its shape well. I mounded the whipped cream on the cupcakes and topped them off with fresh raspberries and blueberries. 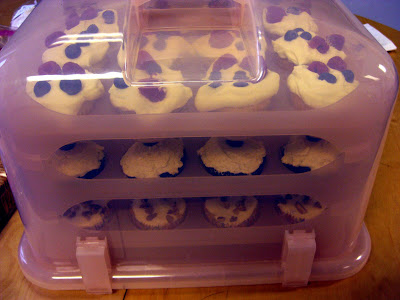 Here are the cupcakes all packed up and ready to go in my trusty cupcake caddy. 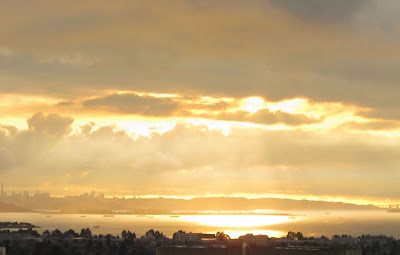 Finally, here's a shot of the sunset from the window of our grad lounge...that's San Francisco in the background. I love living in the Bay Area!