Playing around with swiss meringue frosting

On Saturday, I posted about a happy hour that I organized with some friends from my PhD program. I came up with new frosting ideas for two of the cupcakes, and both worked out really well. Both are based on this recipe for strawberry buttercream from Martha Stewart. I spent way too long trying to get the original strawberry buttercream recipe to work, which it never did, but the variations below were very tasty. I made a full recipe of the Swiss meringue, divided it it half, and then added in my flavors; you could equally make a full recipe of either flavor by doubling the cream cheese or butter/vanilla bean (to frost about 24 cupcakes) or by making a half recipe of the Swiss meringue (to frost 12 cupcakes)

Whisk together the egg whites and sugar in the top half of a double boiler. Place over boiling water and whisk constantly until the sugar dissolves and the mixture feels hot to the touch (about 160 degrees on a candy thermometer), being very careful not to cook the eggs.

Scrape into the bowl of a stand mixer. Whisk on medium-high speed until voluminous white peaks form and the meringue is completely cool to the touch. 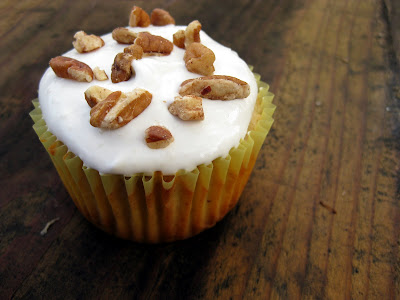 Allow the cream cheese to come to room temperature. Cut it into about 6-8 small pieces. With the mixer running, add it to the Swiss meringue one piece at a time, waiting until each addition is completely incorporated before adding the next piece. 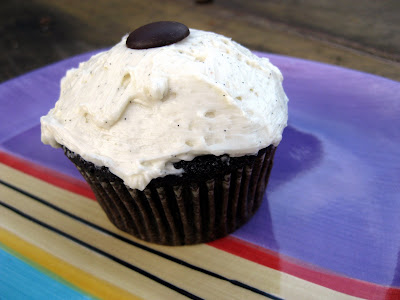 Cut the butter into small pieces. With the mixer running, add it to the Swiss meringue one piece at a time, waiting until each addition is completely incorporated before adding the next piece.

Cut the vanilla bean in half lengthwise and carefully scrape all the seeds out. Add the seeds to the frosting and beat with the paddle attachment until the frosting is light and fluffy. You can store the frosting in the refrigerator for a couple of days, but bring to room temperature and beat until fluffy before using.

)
I realized that I've never actually posted the recipe for these cupcakes on my blog, even though I make them all the time! They're super easy--just one bowl, no need to soften butter, and they bake up perfectly every time.

Put the dry ingredients into a big bowl (flours, cocoa, sugar, soda, b. powder, salt). Whisk together; then add the eggs and yolk, milk, oil, vanilla, and water. Beat with electric mixer on low speed until smooth and combined, about 3 minutes, scraping the bowl as needed.

Divide batter among muffin tins, filling each 2/3 of the way full. Bake about 20 minutes until a tester comes out clean. Cool slightly, then remove from tins and cool fully. Makes about 24 cupcakes plus a little to spare.
Posted by Sara at 7:30 AM