This recipe is adapted from Dorie Greenspan's Around My French Table, and it was a revelation to me! I have never been a huge fan of lentils, but the French lentils du Puy in this soup have fantastic flavor and are much more interesting than the usual brown lentils from the store. I also love the seasoning here - the orange peel in particular is unexpected and oh-so-delicious. Since the soup doesn't contain any bacon or other meat, I like to float a little round of crispy pancetta on top of the soup to provide some textural contrast and yummy pork flavor. 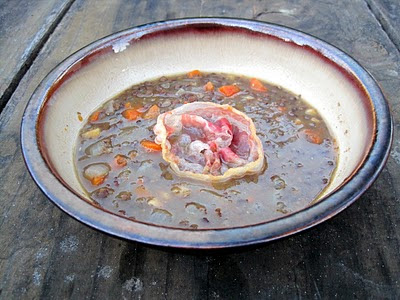 1. Warm the oil in a Dutch oven over low heat.  Add the onion, fennel, and carrot and stir the vegetables until they are coated in the oil.  Cover the pot and cook, stirring often, until the vegetables are softened, 10 minutes.
2. Add the broth, lentils, and orange peel to the pot.  Wrap the peppercorns, coriander seeds, and clove in cheesecloth and tie shut, or use a disposable tea filter.  Add to the pot along with the ginger.  Bring to a boil, and then lower the heat and simmer, covered, until the lentils are very soft, 60 to 90 minutes.  Season with salt and pepper after about 45 minutes of cooking time.
3. Remove the orange peel and spice sachet.  Working in batches, puree about half the soup in a regular blender or with an immersion blender.
4. Fry the pancetta in a non-stick pan over medium heat until crispy.  Ladle the soup into bowls and float a round of pancetta in each bowl.


I'm sending this recipe off to BSI: Broth, hosted this week by Food for Thought.
Posted by Sara at 6:00 AM