Chicken Baked on a Bed of Bread and Swiss Chard

I was instantly drawn to this recipe when paging through Food and Wine magazine.  It looked full of flavor and also fairly healthy.  I downsized the recipe a bit to fit into my Le Creuset cast iron grill skillet (which I won a while back from a fantastic giveaway that More than a Mount Full and CSN put on - thanks!).  I was very happy with the result - the greens were alternately juicy or a bit crispy, the bread was crunchy and yummy, and the raisins and capers made everything much more interesting and flavorful.  I'd just change two things next time. The capers were still pretty salty even after rinsing, and so the dish ended up being a little too salty.  Next time I'd use capers in brine or wash them much more carefully.  Also, the chicken breast dried out a little from all the time in the oven.  I'd probably use skin-on chicken if I made this again, and just remove the skin before serving.  Other than that, this was a really yummy dish that was easy to put together.  Feel free to use whichever chicken pieces you most like - you could probably fit enough chicken for 3 people on this amount of greens if you wanted to, or double everything and use a large pan to make enough for 4-6. 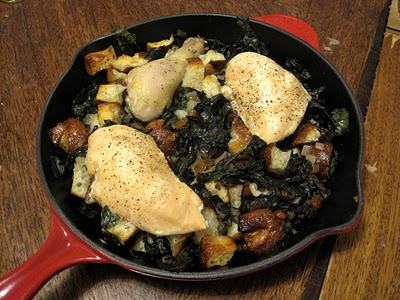 1. Preheat the oven to 350 degrees.  Toss the bread, oil, capers, raisins, chard, shallots, garlic, and thyme together in a large bowl.  Season liberally with freshly ground black pepper and with just a pinch of salt.  Spread into a cast-iron skillet (or another oven-safe dish).
2. Season the chicken with salt and pepper and arrange over the bread.  Cover with parchment paper, and cover with an oven-safe lid.  Bake 35 minutes.
3. Remove the lid and parchment and increase the oven to 400 degrees.  Bake about 10 minutes more, or until the chicken is golden and cooked through.  Remove from the oven and let stand for about 5 minutes before serving.
Posted by Sara at 8:59 PM