I recently won Rocco DiSpirito's new cookbook Now Eat This! from Jen at My Baking Addiction, who was doing a giveaway on her blog!  I made this tasty salmon dish to test it out, and was very happy with the results.  My one gripe with the cookbook is that I think it makes a few too many concessions to "healthy" eating - for example, replacing real bacon with bacon bits in the spinach.  One slice of real bacon divided among multiple portions for flavoring does not add many calories at all, and I'd much rather eat that than something out of a plastic bottle.  I also don't think a healthy dinner needs to be under 350 calories, which is the idea behind the book.  Maybe his idea is that you would add bread or another side to this dish, although I think it's complete as-is -- though I guess a light dinner means you can afford more dessert!  :)

As to the dish, it was really delicious.  I love preparing fish for dinner because you can get a lot of flavor for little effort.  Salmon is the perfect choice here to stand up to the strongly-flavored topping of shallots and dijon mustard.  The shallots are pretty strong because they go onto the fish raw and get don't get cooked too much in the oven; be sure to mince them finely or at even saute them briefly before mixing with the mustard sauce, especially if you're not a raw onion fan.  The spinach makes a quick and delicious side dish - and I definitely recommend springing for the real bacon! 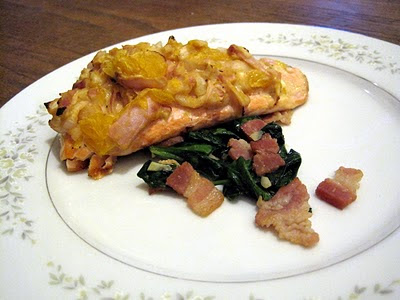 Mustard-Shallot Salmon with Bacon Spinach (adapted from Now Eat This!

1. Preheat the oven to 500 degrees and place a rack in the top third of the oven.  Line a baking sheet with
foil and spray with cooking spray.
2. In a small bowl, stir together the shallot and mustard.  Add the orange or tangerine segments and toss to combine.  Season with salt and pepper.
3. Lay the salmon skin-side-down on the baking sheet and season with salt and pepper.  Spread with the shallot-mustard mixture, spreading to create a thick layer over the whole surface of the fish.
4. Cook until the salmon is just cooked through, about 8 minutes.
5. Meanwhile, prepare the spinach.  Heat a non-stick pan over medium-high heat.  Add the bacon and saute until it just starts to get crispy.  Add the garlic and saute for about 1 minute, until softened.  Add the spinach and saute until wilted.
6. Divide the spinach among two plates and top each with a piece of salmon.
Posted by Sara at 3:10 PM