Baguettes are delicious, but many recipes take upwards of 8 hours or even multiple days to complete.  While most of that time isn't active time, it does make it difficult if you decide you want baguettes with dinner!  This recipe certainly isn't instant, but you can decide on baguettes in the early afternoon and still have dinner at a reasonable hour.  Despite a shorter fermentation than many baguette recipes, this bread still delivers really wonderful flavor and a great chewy texture.  The ice cubes added to the oven while the bread is baking make for an extra crisp crust.  If you have leftovers, you can wrap them in foil and reheat the next day - the crust won't be quite as crisp, but the bread will still be amazing.

Although this bread involves more work than a regular yeasted sandwich bread, none of the steps are particularly difficult.  It's also really cool to see the transformation of the dough from a shaggy mess after it's just been mixed to a smooth bread dough after all the folding.  I'm sure you would get better results if you have a baguette pan, which would allow you to make longer and thinner baguettes than what I was able to achieve by hand-shaping the loaves on a cookie sheet, but my method worked out just fine and didn't involve going out and buying yet another pan.  We served this bread with soft cheese and pickled figs, plus some with chocolate hazelnut spread for dessert.  Two of us devoured an entire loaf along with our dinner, so this is super addictive, especially warm out of the oven! 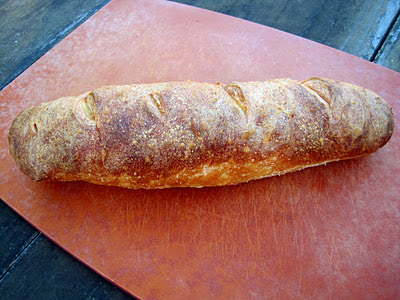 1. Combine bread flour with the water in the bowl of an electric stand mixer fitter with dough hook. Mix on low speed until blended. Stop the mixer and let sit 15 minutes.
2. Add the salt and yeast to the flour mixture.  Mix on low speed for five minutes.  The dough will be very wet at this point.  Scrape the dough into an oiled container, cover, and let rest 20 minutes.
3. Uncover, fold the dough over itself a few times, and let rest another 20 minutes.  Repeat this process one more time for a total of two times folding the dough and three 20-minute rest periods.  Fold the dough over one more time, and then cover and let rest for 2 hours.  At this point the dough should look very smooth and be sticky but much less 'wet' feeling than it was when first mixed.
4. Divide the dough into two pieces and shape each one into a log.  Set on your work surface and cover with plastic.  Let rest 15 minutes.
5. Preheat the oven to 470 degrees and place a metal sheet pan on the bottom rack.  Place the other oven rack in the middle of the oven.  Line a large baking sheet with parchment.
6. Shape each piece of dough into a long baguette shape, turning the dough under with your hands to create as smooth a surface as possible.  Place each baguette on the parchment-lined baking sheet (side by side).  Spray with oil and cover with plastic.  Let rise for 30 minutes.
7. Open the oven and quickly dump the ice cubes onto the hot baking sheet.  Place the baking sheet with the baguettes on the middle rack and quickly close the oven.
8. Bake 20-25 minutes, until the loaves are nicely browned but still have some give when gently squeezed.  Let cool slightly before cutting into the bread.
Posted by Sara at 11:37 AM