Marmalade isn't my favorite fruit spread because I often find it to be way too bitter and overpowering.  That's why I was delighted to find this recipe which combines blueberries and lemons in marmalade.  Although I suppose this recipe is a bit silly in that blueberries and lemons don't really have overlapping seasons, it did turn out to be very delicious with just a bit of bitterness and lots of great lemon flavor.  The color is also a gorgeous purple from the berries.

One word of warning with this recipe - it is a ton of work, probably the most effort of any preserves I've made.  You have to start it a couple of days ahead, and boiling the marmalade down so that it gels takes forever.  But, if you have the time to make it, it's a really lovely marmalade that's perfect even for those who don't think they like marmalade!  On the plus side, the recipe does make quite a lot, and (depending on fruit prices in your area) it is very affordable - mine worked out to just over a dollar a jar. 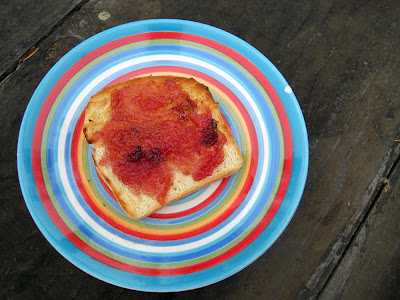 1. Scrub the lemons and slice them very thinly, removing the seeds and any large pieces of pith (for example, you'll want to remove the big piece of pith running town the center).  You can leave the skins intact.  Be sure to reserve any juices from the lemons.
2. Combine the lemons, lemon juice, and water in a very large pot (seriously, you need a huge pot if you're going to make this in one batch!).  Cover and let sit in a cool place overnight.
3. The next day, simmer the water and lemon mixture for 20 minutes.  Cover and let sit in a cool place overnight.
4. The next day, add the sugar and blueberries to the lemons and mix to combine.  Bring to a boil and continue to boil, stirring often (and increasingly as the mixture reduces), until the marmalade passes the gel test.  This will take a really long time - mine took about two hours - so make sure you have someone to chat with or a book to read!  The marmalade will reduce by about two-thirds.
5. Ladle into sterilized jars and process in a boiling-water bath for 15 minutes.  Be sure to check that the seals have popped - if they don't, store the marmalade in the fridge or freezer. 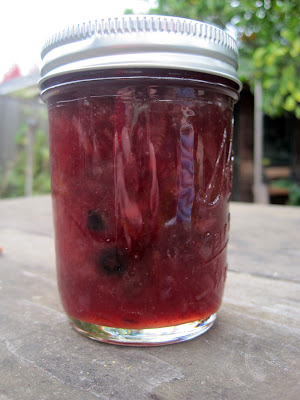