Tim and I made this dish in honor of Mardi Gras, and we absolutely loved it!  We were super tempted by the gorgeous photo on Closet Cooking, and couldn't wait to get started.  The recipe is definitely pretty complicated with lots of different components (all of which seem to need attention at the same time!), but it's so worth it.  I definitely recommend making this recipe with two people in the kitchen so you can more easily have multiple things going at once without going totally crazy.  :)

Starting at the top of the bowl, the shrimp turn out perfectly tender and coated in a flavorful spice mixture that totally transported me back to New Orleans.  Under the shrimp is a rich andouille gravy that just tastes incredible - salty, meaty, and creamy.  The gravy flavors the two veggies underneath, bright green kale and mashed sweet potatoes.  I secretly think these components are added so you don't feel quite so guilty eating the dish, but they're also just tasty additions to the proteins and make this a one-bowl dish.  We were surprised that our leftovers actually kept quite well in the fridge - the texture of the shrimp suffers a bit, but overall everything was very tasty heated up for dinner the next evening.  Just be sure to store each component in a separate container. 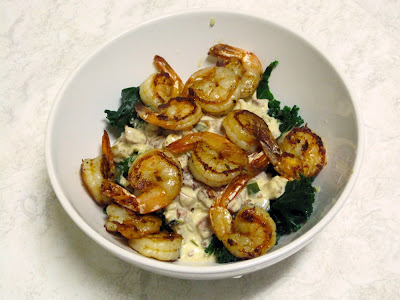 For the kale:
1/2 bunch kale, rinsed and coarsely chopped
Salt

1. Preheat the oven to 400 degrees.  Poke the sweet potatoes with a fork, wrap in tin foil, poke with a fork again, and then bake until tender, about one hour.
2. While the potatoes bake, begin preparing the rest of the dish by cleaning the shrimp, making the creole seasoning, and chopping the vegetables.  Put on a pot of water to boil for the kale.
3. Make the gravy.  Heat the oil in a non-stick pan over medium-high heat.  Add the sausage and saute for three minutes.  Add the onion, celery, and bell pepper and saute for two minutes. Add the garlic and thyme and saute until fragrant, about 30 seconds.  Add the wine and deglaze the pan.  Add the cream and creole seasoning and simmer to reduce by half, about 5 minutes.  Whisk in the butter, remove from heat, and then cover and set aside.
4. Prepare the shrimp.  Toss the shrimp in the oil, and then toss in the creole seasoning.  Melt the butter in another skillet over medium-high heat.  Add the shrimp and saute until cooked, about 1-3 minutes per side.  You may need to do this in batches.  Cover and set aside.
5. Cook the kale.  Salt the boiling water and blanch the kale in it until tender, about 2-3 minutes.  Drain.
6. Finish the potatoes.  Once tender, peel and mash with the butter and cinnamon.
7. Assemble the dish.  Divide the sweet potatoes among four plates.  Top with the kale, andouille gravy, and shrimp. Enjoy!
Posted by Sara at 8:00 AM