When I make mac and cheese at home, I usually stick to my mom's recipe - it's easy, comforting, delicious, and quite a bit healthier than most mac and cheese recipes out there (no butter, skim milk, and a limited amount of cheese). However, I have to say that this baked version is totally worth the extra effort and the extra calories! A rich cheese sauce is combined with an entire jar of red curry paste and then blanketed under buttered bread crumbs and baked - wow!  I was definitely nervous about adding the full amount of curry paste, but the result is not overwhelmingly spicy at all - I think the spices are balanced by the large amount of dairy in the dish, creating an excellent boost of flavor without becoming the only thing you taste.  Definitely give this one a try if you're in the mood to indulge a bit and would like a twist on the traditional mac 'n' cheese. 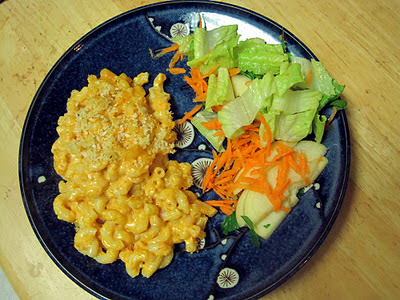 1. Put on a large pot of water to boil.  Salt, and then cook the pasta according to package directions.  Drain.
2. Meanwhile, melt the butter in a large pot over medium-high heat.  Whisk in the flour and continue to whisk until the mixture browns and releases a toasty aroma, about 1 minute.
3. Whisk in the red curry paste (yes, the whole jar!).  When smooth, pour in the half-and-half. Bring to a boil, whisking constantly.  Reduce heat and simmer until the mixture thickens, whisking occasionally, about 5 minutes.
4. Remove the pot from the heat and whisk in the cheeses until melted.  Add the pasta and toss to combine.
5. Turn on the broiler.  While it heats up, toss together the panko and melted butter, and season with salt and pepper.
6. Put everything together.  Pour the mac and cheese into a broiler-safe casserole dish, sprinkle with the panko topping, and then broil until browned, about 1 minute.
Posted by Sara at 12:45 PM