I love mini cheesecakes - there's built-in portion control, plus they're so cute!  These cheesecakes are seriously delicious - the cheesecake itself is pucker-y tart and not too sweet, with a sweeter sour cream topping.  Coconut provides flavor for both the base and the garnish: a flurry of toasted coconut tops off the cheesecake, while untoasted coconut is combined with graham crackers for a tasty crust.  The yield will vary a bit depending on what you use to bake the cheesecakes - we made 12 in muffin tins and mixed up some extra crust for a small pie pan to bake up the extra batter.  Our best guess was that this would fill 18 muffin tins if baked all in those.  You can also use mini cheesecake molds if you have them. 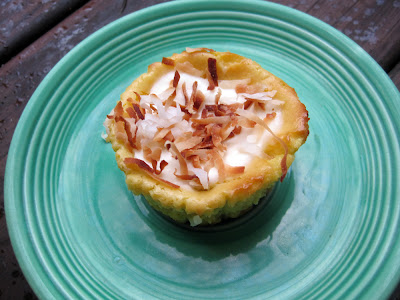 
1. Preheat the oven to 325 degrees.  Place 18 cupcake papers in muffin tins.
2. Combine the graham cracker crumbs, shredded coconut, and butter in a food processor and pulse until well combined.  Divide among the cupcake papers and press down with fingers or the back of a spoon. Bake about 10 minutes to set the crust, and then remove from oven and let cool (leave the oven on for baking the filling).
3. Beat the cream cheese until it is smooth with no lumps.  Beat in the eggs one at a time.  Beat in 1/2 can of the sweetened condensed milk along with the granulated sugar. Beat in the lime juice and zest.  Taste, and add more sweetened condensed milk to taste.
4. Divide the cheesecake filling among the muffin tins, filling each one almost all the way full.
5. Bake 30-35 minutes, until the cheesecakes are set.
6. Remove from oven and let cool - the cheesecakes will sink, but that's ok since they'll be covered in topping.
7. Once the cheesecakes are cool, stir together the sour cream and powdered sugar.  Cover each cheesecake with a spoonful of sour cream topping.  Chill the cheesecakes.
8. Sprinkle with toasted coconut just before serving (so the coconut doesn't get soggy).


I'm sending this recipe off to the citrus blog hop at Katherine Martinelli.
Posted by Sara at 10:00 AM