Do you read the Recipe Girl blog?  I'm a big fan, so I was excited to see that Lori recently released a new cookbook.  I snagged a copy right away, and was excited to page through it and take in all the tasty recipes.  I have to be honest that I adapted the heck out of the first one I tried...I know it's not necessarily the best way to test out a new cookbook, but the recipe turned out great anyway!  The original recipe was for shrimp in barbecue sauce with zucchini.  I selected this recipe because we had tons of squash from our CSA box that I wanted to use up, but unfortunately the only shrimp at Trader Joe's was frozen, which didn't really appeal.  I ended up picking up a package of their chicken meatballs, which actually worked really well as a substitution! Obviously not a substitution you'd want to use in every dish, but the meatballs were fantastic in the savory barbecue-zucchini sauce and the whole dish was comfort in a bowl.  Tim and I both agreed that this was a fun twist on meatballs! 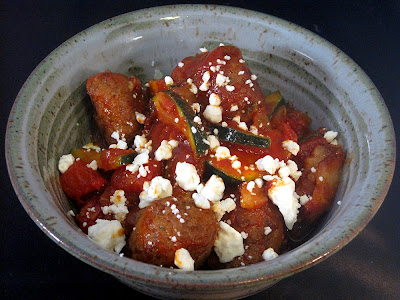 1. Preheat the oven to 400 degrees.  Line a baking sheet with foil and set a rack on the baking sheet.  Lay the bacon on the rack in one layer, and cook in the oven until crispy.
2. While the bacon is cooking, cook your starch according to package directions (see the end of the recipe for suggestions).
3. Heat a large skillet over medium heat.  Add enough oil to just coat the bottom of the pan, and then add the onion.  Cook, stirring often, until the onion has softened, about 5 minutes.
4. Stir in the meatballs, garlic, and red pepper flakes.  Continue to cook for another 3-4 minutes or so, until the meatballs get a little browned on the outside.  Pour in the wine, and stir until it is just about evaporated, about 1-2 minutes.
5. Stir in the zucchini and cook 3-4 minutes, until slightly softened.  Add in the tomatoes, barbecue sauce and oregano, and let the mixture bubble away for 4-5 minutes.
6. Chop the bacon into small pieces, and add it to the meatballs; stir to combine.  Taste, and season with salt and pepper if necessary (mine was already pretty salty, so I didn't add more).
7. Place a scoop of your starch in a bowl, and then top with the meatball mixture and a sprinkle of feta cheese.
Posted by Sara at 7:30 AM