One of my housemates got some eggplants in her CSA box, and I decided to turn them into baba ghanoush.  While it wasn't quite as transcendent as the baba ghanoush at my favorite Middle Eastern restaurant, Aladdin's Eatery, it was quite delicious as a dip for heirloom tomatoes and cucumbers.  I made my own tahini out of sesame seeds and olive oil because the grocery store was only selling it in huge quantities, and that's definitely the part of the recipe I'd try to improve next time.  It ended up a little bitter, I think because I accidentally bought un-hulled sesame seeds.  Next time, I'll try it with the hulled variety, because it was definitely a lot cheaper than purchased tahini!  Overall, this was a very tasty and healthy dip, and it was a lot easier to make than I thought! 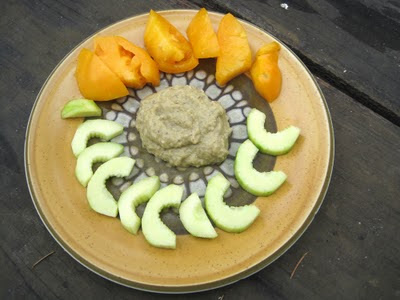 1. Preheat the oven to 350 degrees.  Line a sheet pan with foil, spray with oil, and then place the eggplants on the pan.  Prick all over with a fork to allow steam to escape.  Roast, turning occasionally, until the eggplants are totally collapsed and mushy, about 45 minutes.
2. Allow the eggplant to cool slightly, then cut in half and scrape out the flesh.  You should have about 3/4 cup, packed.  Place in a colander and allow to drain for 3 minutes.
3. Place the eggplant in a food processor along with the lemon juice, garlic, and tahini.  Add a generous pinch of salt and a few good grinds of pepper.  Process until the texture is coarse and choppy, then taste and adjust for seasoning.  Process until almost smooth.
4. Place in a serving bowl and cover with plastic wrap, pressing the plastic on the surface of the baba ghanoush.  Chill at least 45 minutes before serving.
Posted by Sara at 12:00 PM