This galette makes for a super delicious (if not particularly easy) dinner, and it's easy to scale up or down for however many people you're cooking for.  I made two individual-sized galettes just because that's more fun, but you could actually probably serve four with these ingredients if you served it with a big salad or a hearty soup.  I'd recommend going all-out and making your own ricotta if you have time, because it really adds something special - but that's an easy shortcut if you're low on time.

I went for this oil-based half-whole-wheat crust to try and make the galette a bit healthier, but I don't necessarily recommend it.  It wasn't bad, but it was a little tough and just overall didn't have a great texture.  Other than that, though, this was a real winner.  The kale-ricotta filling is extremely tasty, and it's topped with nicely caramelized onions and zucchinis.  If you have some extra time some evening, you should definitely give it a try! 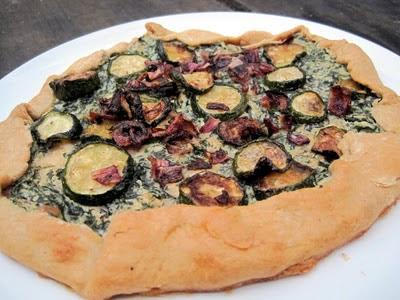 1. Preheat the oven to 425 degrees.  Toss the squash and onions with olive oil, and then season with salt and pepper.  Roast about 25 minutes, until browned and cooked through.  Turn the oven down to 375 degrees and leave it on while you finish the galettes.
2. Meanwhile, heat some olive oil in a non-stick skillet.  Add the kale (in batches if necessary), and season with salt.  Cook until tender, and then transfer to a paper towel-lined colander.  Drain and allow to cool for a few minutes, then press down on the kale to remove as much liquid as possible.  Finely chop.
3. Lightly beat the egg in a small bowl.  Add about half the egg to the ricotta, and reserve the remaining egg to the side.  Whisk in the lemon zest, salt, and pepper, and then stir in the kale.  (Use your judgment - you may not use all the kale.)
4. Make the crust.  Whisk together the flours and salt, and then stir the oil in with a fork.  Add the water, and stir with a fork until the dough comes together.  Divide in half, and roll each half out relatively thinly (as desired).
5. Spread half the ricotta-kale mixture on each crust, leaving a border around the edges.  Top with the squash-onion mixture. Fold the edges of the crust over the filling.
6. Whisk the remaining egg with a bit of water, and brush onto the crust.
7. Bake the galettes at 375 degrees for about 25-30 minutes, until the crust is browned and the filling is bubbling. 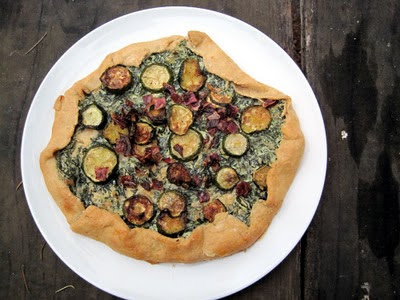