One of my new housemates asked me to make this recipe from a cookbook he brought home from a conference.  I was only too happy to agree, because the recipe looked amazing!  The bread pudding itself is easy to put together -- not too sweet, perfectly custardy without being overly soggy or dry, and with nice bits of chocolate sprinkled throughout.  What sets this bread pudding apart is really the presentation.  After you bake the pudding, you let it cool slightly, slice it into 9 squares, and wrap each one up in a corn husk like a tamale!  This makes the bread pudding much neater and more special than the usual sort, which usually isn't a particularly fancy dish.

I did have a big failure with this dish, which was trying to make my own cajeta.  I overcooked the caramel and ended up with candy instead of a caramel sauce!  Caramel is tough to make - I've managed to make it properly maybe two or three times, but there have been many more attempts than that!  In this case, at least it didn't burn, so we were able to cut it into squares after it hardened and enjoy it as candy - sort of like a praline.  It was tasty, but definitely not ideal to serve with the bread pudding.  So, unless you're a caramel expert or a glutton for punishment, I'd recommend just thinning some jarred cajeta or dulce de leche to drizzle over the tamales. 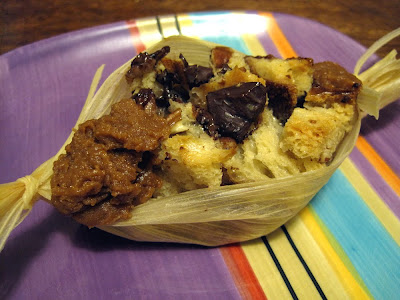 1. Soak the corn husks in hot water until pliable, 1-2 hours.  Preheat the oven to 350 degrees.  Line an 8x8 square pan with foil or parchment, and spray with oil.  Set aside.
2. In a large bowl, whisk the eggs. Add the milk and cream, and whisk to blend.  Add the vanilla, lemon juice, salt, pecans, and chocolate, and whisk again.  Add the bread and fold in with a rubber spatula or large spoon until well combined.
3. Scrape the mixture into the prepared pan, and bake 1 hour, or until a knife inserted in the center comes out moist but clean.  Remove from the oven and let cool slightly.
4. Lay 9 of the husks flat on a work surface.  Slice the pudding into 9 equal pieces, and place one piece in the center of each husk, spreading it to within about 1 inch of the edges.  Use the final husk to tear off thin pieces of husk.  Use the thin pieces to tie up each end of the husks in order to form little packages around the bread pudding.  Serve with cateja or dulce de leche drizzled on top.
Posted by Sara at 1:55 PM