I love pancetta - it has all the fantastic pork-y flavor of bacon, but it's so thinly sliced that it doesn't overwhelm a dish (and you also save a few calories).  This dish showcases the pancetta perfectly.  It adds a wonderful salty note to a simple fish dish.  I also love the marinated tomatoes that top the fish.  Initially, I was a little worried that the flavors of tomatoes and fish wouldn't go well together, but I don't know what I was thinking!  They might be a slightly unusual pairing, but they go together very nicely.  Using high-quality heirloom tomatoes here really makes the difference...they pretty much taste exactly like summer! 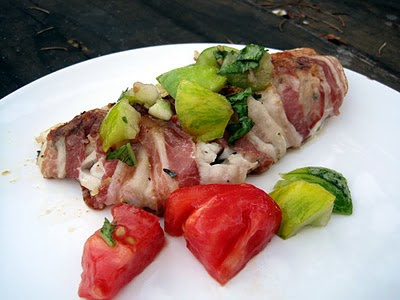 1. Sprinkle the lemon zest and thyme leaves evenly over the fillets of fish.  Season with salt and pepper.  Carefully wrap the pancetta around the fish.  Cover with plastic, and let chill in the fridge for a few hours (or all day, if you'd like to prepare the fish in the morning).
2. Remove the fish from the fridge about 15 minutes before ready to cook.  Cut the tomatoes into large chunks, and add the olive oil, vinegar, basil, and shallots.  Season with salt and pepper, and allow to marinate while you prepare the fish.
3. Heat a non-stick grill pan, griddle, or large skillet over medium-high heat.  Spray with oil.  Place the fish on the pan, and cook until the pancetta is crispy, 3-4 minutes.  Flip the fish, and cook a further 3 minutes.  Check for doneness by poking into a piece of fish with a knife and fork, and continue to cook if the fish is not yet opaque on the inside.
4. Serve the fish topped with the marinated tomatoes and a squeeze of lemon juice.
Posted by Sara at 12:40 PM