I didn't used to be a huge fan of lentils, but I've gotten really into cooking them this year - they're cheap, healthy, easy to prepare, and they work well with all sorts of flavors and cuisines.  This Asian-inspired coconut curry soup is a great example of that - mild red lentils are a perfect base for flavorful spices, coconut milk, citrus, and lemongrass.  I really enjoyed this soup, but I'd make a couple of changes if I make it in the future.  First, I'd add more veggies - the spinach I added wilted down to almost nothing, so next time I'd either add more spinach or throw in some carrot or squash to bulk things up in the vegetable department.  I'd also put in larger pieces of crushed lemongrass, let them cook with the soup, and then fish them out before serving - although the minced lemongrass approach does work with some dishes, in this case I found the texture to be distracting, though the flavor was good.  Overall, this is a comforting, warm bowl of soup that will totally satisfy for lunch on a rainy day! 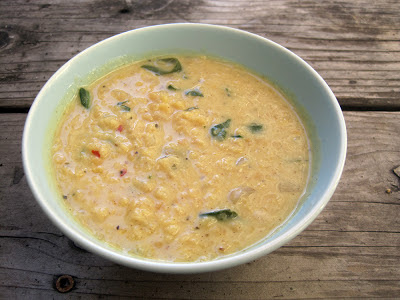 1. Combine the lentils, broth, thyme, and curry powder in a soup pot.  Bring to a boil and then simmer about 15 minutes, until the lentils are cooked.
2. Meanwhile, heat the coconut oil in a pan over medium heat.  Add the onion and saute until just browned  Add the lemongrass, along with the salt, cardamom, cinnamon, red pepper flakes, and nutmeg.  Cook for another minute or so, stirring often.  Scrape the onion mixture into the cooked lentils.
3. Add the coconut milk and spinach to the soup and bring to a simmer.  Simmer about 5 minutes, stirring occasionally.  Stir in the lemon and lime juice, and then taste and adjust for seasoning.
Posted by Sara at 12:39 PM