For this month's Secret Recipe Club, I was paired up with Veggie Grettie.  Gretchen's blog is full of awesome-looking recipes, and they're all vegan and gluten free!  I chose to make her recipe for crispy smashed potatoes.  I've seen this sort of recipe on a few different blogs and it always looked really delicious, so this was the perfect excuse to give it a spin!  I'm definitely a big fan - the potatoes come out of the oven with a perfectly crispy, salty exterior and a creamy interior.  They make a great side dish, and you can easily change up the flavor by using different sorts of seasoning salt.  I served these with Swedish meatballs and homemade egg noodles - recipe coming soon! 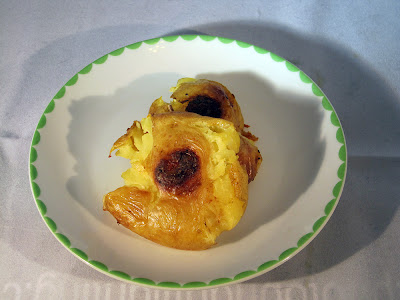 1. Preheat the oven to 425 degrees.  Line a large baking sheet with foil.
2. Toss the potatoes with a generous amount of oil and a good sprinkling of seasoning salt.  Place in a single layer on the baking sheet.  (If the potatoes don't fit in a single layer with a good amount of room between each potato, use two sheets - you're going to be smashing the potatoes later, so they need some space.)
3. Bake 20-30 minutes, shaking the baking sheet occasionally, until the potatoes are tender.
4. Use a heavy water glass or something similar to smash each potato until it is slightly flattened.  Space out the potatoes evenly, and then drizzle with a bit more oil.
5. Bake another 15 minutes or so, until crispy.
Posted by Sara at 9:00 AM