If you liked the crispy smashed potatoes I posted on Monday, you won't want to miss the main dish I served with them: Swedish meatballs!  I have to admit, I've actually never had the famous Swedish meatballs from Ikea, mostly because I am always too tempted by their mac and cheese!  So, I can't say for sure how these compare - but I can definitely say they are really delicious.  These meatballs get a shortcut by starting with Italian sausage, so they're pre-spiced.  Just add breadcrumbs, milk, and a little bonus nutmeg to get great meatball flavor.  Most of the effort in this recipe is rolling the meatballs, so grab a partner if you've got someone that can help.  After the meatballs are rolled, they're simply browned and combined with a simple pan gravy.  My sauce never really thickened like it was supposed to, but it was still totally creamy and delicious - next time, I might splurge on some creme fraiche for a fancier sauce, but sour cream totally got the job done.

I served these tasty meatballs over fresh pasta.  I've been participating in a political forecasting project for the past year or so, and I used my 'honorarium' from the first year to snag a pricey item I've been wanting for a long time - the pasta attachment for my Kitchen Aid!  I've had a manual pasta machine in the past, but it was ultimately just too much work and I didn't like using it.  The Kitchen Aid version is awesome - it definitely made making fresh pasta a lot more fun.  Still a weekend activity, but one I can look forward to rather than dreading!  And the pasta turned out perfectly - score!  I'll definitely be making this again soon. 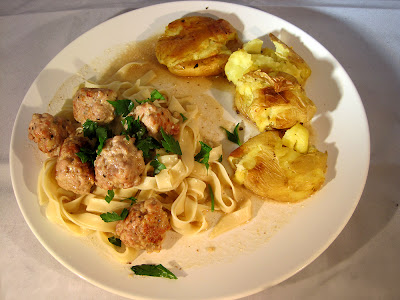 1. Make the pasta.  Combine all the ingredients in the bowl of a stand mixer.  Mix with the paddle for about 30 seconds, and then switch to the dough hook and mix on low speed for a few minutes, adding more water as needed, until the dough pulls together in clumps.  Knead by hand for a minute or so to create a cohesive ball of dough.  Cover with a towel and let rest for 20 minutes.
2. After the dough has rested, divide into four pieces and roll out in a pasta machine following the instructions for your pasta machine.  Cut into desired shape (I made fettuccine).  Let dry over the backs of towel-covered chairs while you prepare the rest of the recipe.
3. Make the meatballs.  In a large bowl, gently mix together the sausage, panko, milk, and half the nutmeg.  Season with salt and pepper.  Roll into smallish meatballs.
4. Heat olive oil in two wide non-stick skillets - use enough to just cover the bottoms of the skillets.  Brown the meatballs on all sides, and then add 1 cup beef broth to each skillet.  Cover and simmer about 10 minutes.  Uncover and continue to simmer until the broth just coats the back of a spoon.  Meanwhile, put a big pot of salted water to boil for the pasta.
5. Combine the meatballs and sauce into one skillet (assuming it fits - if not, you can keep them separated).  Add the remaining nutmeg and the sour cream.  Stir briskly to combine the sauce - mine stayed a little separated, but was still tasty.
6. Cook the pasta in the boiling water for about 2 minutes, and then drain.
7. Serve the meatballs and sauce over the fresh pasta.  Sprinkle with parsley.
Alternate gravy, no issues with breaking:
Make a roux with 1/3 cup butter and 1/3 cup flour. Whisk in 2 T Better Than Bouillon beef stock. Add a pink of nutmeg and several grinds of black pepper.  Gradually whisk in 4 cups hot milk.  Whisk over medium-low heat until thickened.
Posted by Sara at 12:15 PM