Potato gratin is one of my favorite celebratory side dishes, but sometimes it's fun to switch it up (whether it's a holiday or not).  This gratin replaces the potatoes with thinly sliced fennel, which is a veggie I love and use all the time.  It's great raw in salads, and it's a great substitute for celery in pretty much everything if you're not a celery fan (like me).  This gratin is yet another use for this versatile vegetable.  Despite all the cream, the dish feels much lighter than a potato gratin, with tender slices of fennel in cream sauce covered with a blanket of Parmesan bread crumbs.  Serve this next to simple roasted meat or as part of a holiday side dish spread, and it's sure to add something special to your meal. 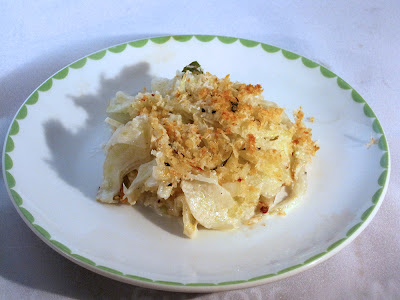 1. Preheat the oven to 400 degrees. Spray a 2-quart casserole dish with oil.
2. In a large skillet or pot, combine the fennel, cream, and water.  Season with salt and pepper.  Bring to a simmer over medium heat, stirring occasionally.  Transfer to the casserole dish.
3. While the fennel-cream mixture is coming to a simmer, mix together the panko, Parmesan, parsley, and olive oil in a bowl.  Season with salt and pepper, and mix to combine.  Sprinkle over the fennel
4. Place the dish on a foil-lined baking sheet.  Bake until the topping is golden and crisp, 30 minutes.
Posted by Sara at 10:26 AM