What do you do when you end up with too many beets in your CSA?  Make chocolate cake, of course!  This recipe from Nigel Slater has been on my "to bake" list for a while, and since the beets have been coming in a steady stream all winter, I really had no excuse.  I'll warn you up front that this cake involves a lot of work: there's cooking the beets, pureeing the beets, melting the chocolate in a double boiler, whipping the egg whites, sifting the cocoa powder and flour.  Whew!  This cake definitely creates a lot of dishes.  That said, if you've got an afternoon to spare, the final product is both beautiful and delicious.  The cake is pink going into the oven, but it comes out a lovely mahogany color.  It's super moist, and the beets lend a subtle earthy flavor.  The cake makes a great dessert, and the beets make me feel it's a semi-legitimate choice for breakfast - it's definitely fantastic alongside a cup of coffee. 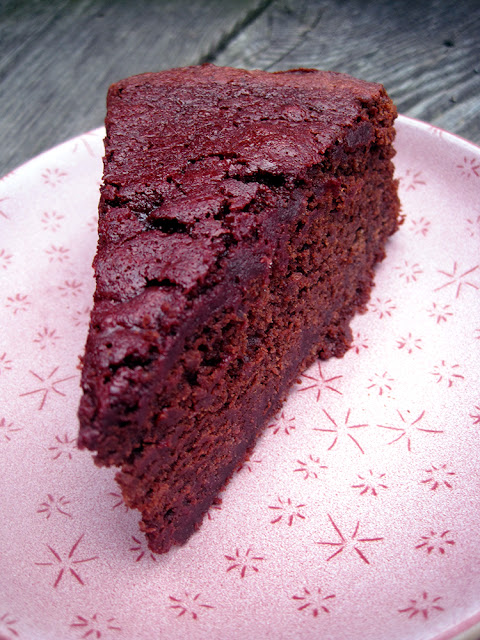 Chocolate Beet Cake (adapted from Tender: A Cook and His Vegetable Patch)
Makes one 9-inch round cake, serving at least 8

1. Grease a 9-inch springform pan.  Preheat the oven to 350 degrees.
2. Bring a large pot of water to a boil, and cook the beets (whole and unpeeled), until tender - about 30 to 40 minutes.  Drain, let cool under running water, and then slip off the skins.  Slice off the stem and root, and then puree until very smooth.  Set aside.
3. Set up a double boiler, and place the chocolate in the top over simmering water.  Stir occasionally.  When the chocolate looks almost melted, add the coffee and stir to combine.  Add the butter, and stir to combine.  Let the butter soften, stirring occasionally.  When the butter is almost all melted remove from the heat and allow the butter to continue to melt from the heat of the chocolate.  Stir to combine, and then let cool slightly.
4. Place the yolks in a large bowl and stir to break them up.  Place the whites in a separate bowl.
5. Add the chocolate-butter mixture to the egg yolks and stir quickly to combine.  Fold in the pureed beets.
6. Beat the egg whites with an electric mixer until foamy.  Add the sugar and beat until stiff peaks form.  Add the whites to the chocolate mixture and gently fold them in.  Sift the flour, cocoa powder, baking powder, and salt over the batter.  Gently fold in, being careful not to deflate the batter too much, but also making sure the flour is fully incorporated (a delicate balance!)
7. Scrape the batter into the prepared pan.  Place in the oven, and immediately decrease the temperature to 325 degrees.  Bake 45-50 minutes, until a tester comes out slightly moist.  Set aside to cool, and then remove from pan.