Stuffed Peppers with Pork and Rosemary

When I was younger, I hated bell peppers, and therefore I hated stuffed peppers. I'm glad my taste buds have expanded their range, because these stuffed peppers are fantastic!  The peppers are blanched before baking to make sure they get tender.  Then they're stuffed with a flavorful combination of ground pork, garlic, and rosemary.  Simple, and so tasty!  These make a great dinner with a green salad, and the leftovers keep well for lunch the next day. 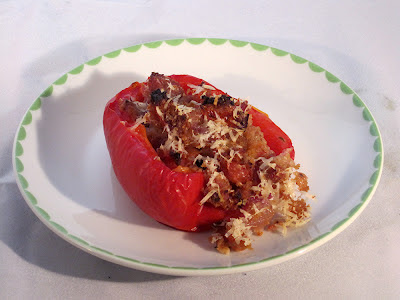 Stuffed Peppers with Pork and Rosemary (adapted from Nigel Slater's Tender: A Cook and His Vegetable Patch)
Serves 4-5

1. Preheat the oven to 400 degrees and line a large rimmed baking sheet with foil.  Lightly grease the foil.
2. Heat a few glugs of oil in a nonstick skillet over medium heat.  Add the onion and stir for a few minutes until the onion is softened but not brown.  Add the garlic and rosemary.  Cook for another minute or so, stirring.Add the tomatoes, and cook until the tomatoes have collapsed into the sauce.  Season with salt and pepper, and then stir in the pork and breadcrumbs.  Cook for 3-4 minutes, until the pork is starting to cook but isn't fully cooked.  Remove from the heat.
3. Bring a large pot of water to a boil.  Cut the peppers in half lengthwise and remove the seeds.  Lower the pepper halves into the boiling water and cook 6-8 minutes, until slightly limp.  Remove with a slotted spoon, and place skin-side-down on the baking sheet.
4. Divide the pork mixture among the peppers, and drizzle with a bit of olive oil.  Sprinkle with Parmesan.  Bake 35 minutes, until sizzling.
Posted by Sara at 9:06 AM