I made this cheesecake all the way back at Thanksgiving (yes, I'm behind on posting recipes!).  I came up with the idea because I saw a lot of versions circulating some of my favorite blogs, and the combination of apple pie and cheesecake just sounded too good to pass up. We were also planning on having four different pies for Thanksgiving, so it seemed like a good idea to make one of them a little different than usual!

This cheesecake absolutely delivers on both the apple pie and the cheesecake front.  The cheesecake is creamy, tangy, and just sweet enough, while the pie layer features a thin-but-flavorful layer of soft-but-not-mushy apples in a sweet, cinnamon-y syrup.  I used a 9-inch round springform pan, which just barely contained all of the batter; if you make this in a 10-inch pan, you could add even more apples, which would make the layers more even (as it is, there is way more cheesecake than apple pie filling - not a bad thing, but just depends on the balance you like).

One tip - when you take the pie out of the oven, make sure to cool it on a rack set over a plate or baking sheet, as I got quite a lot of leakage through the pan.  I was worried I'd end up with a super soggy crust, but it was actually all good (except for my slightly messy table!). 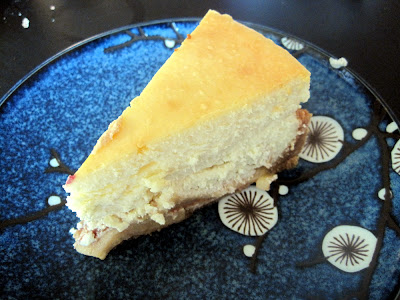 1. Wrap a 9- or 10-inch springform pan with foil.  Get a larger pan ready to use for a water bath, and boil water to use in the water bath.  Preheat the oven to 350 degrees.
2. Make the crust: Grind up the graham crackers in a food processor.  Add the sugar and pulse to combine.  Add the butter and pulse until the mixture has a fairly uniform texture.  Press half the crumbs into the bottom of the springform pan and the other half into the sides (they won't go all the way up, but that's okay).  Place the springform pan on the larger pan and set aside.
3. Make the apple layer.  Gently toss all the ingredients together and pour into the springform pan, trying to get the layer as even as possible.
4. Make the cheesecake layer.  Cream together the cream cheese, sugar, and flour.  Add the milk and beat to combine.  Add the eggs one at a time, beating until combined after each addition.  Add the sour cream and vanilla and beat to combine.  Tap the bowl on the counter a few times to get rid of any air bubbles.
5. Pour the cheesecake over the apple layer and place the pan in the oven.  Pour the boiling water into the outer pan to create a water bath.
6. Bake 60-90 minutes, or until the center is almost set (baking time may change depending on your pan size).  Turn off the oven and let sit 3 hours or until room temperature. Chill overnight.
Posted by Sara at 9:29 AM