Sorry I've dropped off the map for the past week - I was at a conference in New Orleans talking political science by day and eating amazing food by night.  Over just a few days, I managed to try jambalaya, gumbo, red beans and rice, shrimp po boys, bread pudding, beignets, pecan pralines, raw oysters, fried catfish, a muffaletta sandwich, chicory coffee, and more!  I may have gained ten pounds, but it was totally worth it - yum!  I have to admit though, I am looking forward to getting back to my own kitchen!  Speaking of which...

These chicken tacos pack a spicy punch full of chipotle flavor - I love chipotles in adobo since they're such an easy way to add great flavor to a dish.  If you're not such a fan of spice, you could use half the amount of chipotles and I bet the sauce would still be great.  Although this dish has quite a few steps - brown the chicken, make the sauce, puree the sauce, bake everything together, and then shred the chicken - the recipe makes a ton of food and the leftovers keep well.  You can go for more chicken, which kept well in the fridge for a few days.  Or, if you go with the smaller amount of chicken, you'll have tons of leftover sauce which has a lot of great uses.  We cooked about a pound of boneless thighs, which made enough tacos for four people.  We had enough sauce to enjoy as a fantastic spicy salsa once chilled, plus enough for a batch of baked enchiladas that was super easy and delicious (just pour the sauce over enchiladas filled with your favorite fillings, top with cheese, and bake until bubbly). 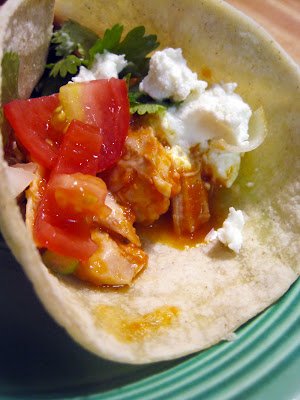 1. Heat enough oil to cover the bottom of a large non-stick skillet over medium-high heat.  Season the chicken all over with salt and pepper and then brown in the skillet, turning once.  Work in batches if needed.  Transfer the chicken to a 9x13 baking dish.
2. Add the onions to the skillet, adding more oil only if needed.  Cool over medium-high heat, stirring occasionally, until the onion is lightly browned and softened, five minutes.  Add the garlic and cook until fragrant, two minutes.  Add the tomatoes and their juices, the chipotles, and the chicken broth, and bring to a boil.  Reduce heat and simmer, stirring occasionally, for 20 minutes or until the sauce is thickened and slightly reduced.
3. Preheat the oven to 350 degrees.  Let the sauce cool slightly, and then puree in a food processor or blender, or with an immersion blender - be very careful with pureeing hot liquid!  Taste and season with salt and pepper.
4. Pour the sauce over the chicken.  Bake uncovered for about 45 minutes, until the meat is tender and the sauce is thick and darkened around the edges.  Warm the tortillas.
5. Remove the chicken from the sauce and shred using two forks.  (Remove the bones if using bone-in chicken thighs.)  Add as much sauce as you like to the chicken and toss to combine.  Any extra sauce can be used as an enchilada sauce or as a fantastic salsa.  (You'll have a lot of leftover sauce if you only cook one pound of chicken.)
6. Fill warm tortillas with the chicken tinga mixture and any toppings you like.
Posted by Sara at 9:54 AM