These gingerbread cupcakes are intensely ginger-y, with a deep molasses flavor and a great kick from half a cup of dark beer.  The cupcakes come from a cookbook that aims to create a more butch cupcake - most of the recipes include beer, bacon, whiskey, rum, coffee, pretzels, chilies, or some sort of other 'manly' ingredient that doesn't typically show up in cupcakes.  I don't know if these cupcakes really appeal more to men (I've found they'll eat pretty girly cupcakes if they taste good!), but they certainly are delicious, and I think the flavors would be enjoyed by anyone. I was really skeptical of adding two whole tablespoons of ground ginger to such a small batch of cupcakes (not even two dozen), but it actually really works and makes for a super-flavorful dessert.  I paired the cupcakes with a simple lemon frosting, just because I think lemon and gingerbread go really well together, but you could also use vanilla, ginger, or chocolate depending on your preference. 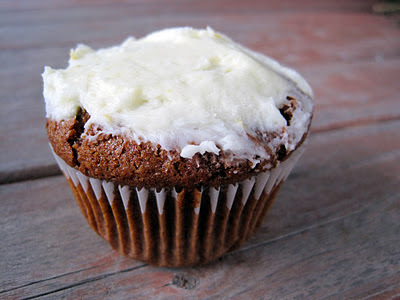 1. Preheat the oven to 350 degrees and place 15 cupcake papers in muffin tins.
2. Whisk together the flour, baking soda, ginger, allspice, cloves, and salt.  Set aside.
3. In a medium bowl, whisk together the brown sugar, oil, molasses, eggs, and vanilla until creamy.  Beat in the flour mixture, combining well.
4. In a small saucepan, heat the beer almost until boiling.  Slowly add it to the cupcake batter and whisk in to incorporate.
5. Fill each muffin cup about 3/4 of the way full.  Bake until a tester comes out clean, about 20 minutes.  Let cool.
6. Once the cupcakes are cool, make the frosting.  Beat the butter until creamy.  Beat in the powdered sugar until smooth.  Beat in the lemon juice and zest.  Taste, and beat in more powdered sugar to taste (and/or to get the consistency you like).  Frost the cupcakes immediately.
Posted by Sara at 10:13 AM